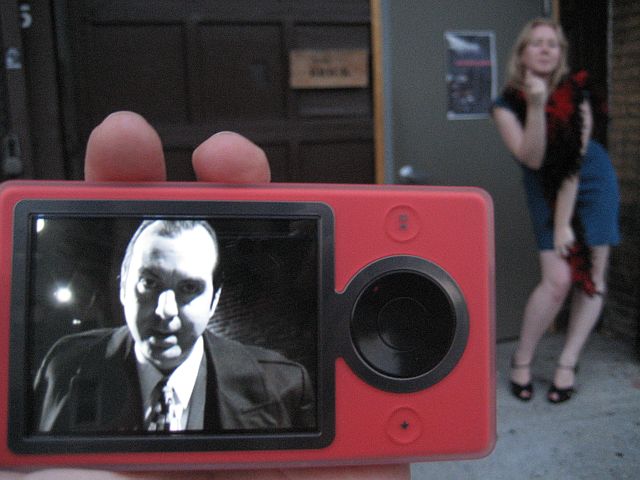 If you’ve ever watched acting so bad it made you want to shove the performer offstage and play the role yourself, Suspicious Package is for you. The creators of this clever little production have spared themselves the headache of dealing with actors by casting the audience and turning them loose on the streets of Williamsburg. It happens for just four people at a time, and when you buy your ticket online you cast yourself in one of the roles, choosing either the producer, the showgirl, the heiress, or the private detective.

Upon arrival at the Brick Theater, where the show premiered as part of the Film Festival: A Theater Festival, you’ll be given a costume piece related to your role (a boa for the showgirl, a fedora for the detective), a Zune Media player and headphones. All four devices are started simultaneously, and you’re soon immersed in a sordid noir potboiler which I won’t spoil here. The voice you hear through the headphones is that of your character talking to him or herself, and the pre-recorded black and white video that plays on the Zune is shot as if it's from your point of view, like the first part of Dark Passage.

While the action lags a bit at times – the producer spent too long listening to a Dodgers game for my tastes, though I’m not a baseball fan – it’s amusing to interact with the other characters using the dialogue that pops up on the screen. I noticed the performances of my castmates become more assertive and nuanced as the show went on, and even though I only knew one of them before it started, by the end we were swapping stories about the experience and lingering over drinks. All in all, a fun 45 minutes – it’s not The Big Sleep, but I'm not Humphrey Bogart.

#brick
#brooklyn
#film festival
#play
#review
#show
#suspicious package
#theater
#williamsburg
Do you know the scoop? Comment below or Send us a Tip