I never saw First Blood in the theater; I was seven when it was released. But I vividly recall my first exposure to the movie, which occurred a few years later when I caught a glimpse over the shoulders of older cousins watching it on VHS during a family barbecue. I was soon yanked away, but not before the image of a bloody Sylvester Stallone screaming in anguish was imprinted on my ten-year-old mind. Who knows exactly which scene it was—Stallone's bloody and screaming throughout—but it definitely made an impact, as it has on actor Zachary Oberzan, whose 80 minute play Rambo Solo consists entirely of his retelling of First Blood's story.

The production is the latest winning experiment from the Nature Theater of Oklahoma, a company that's quite enamored with what might be called the aesthetics of amateurishness. Their previous hit show at Soho Rep, No Dice, transformed odd transcripts of telephone conversations into pseudo dinner theater; and their Poetics: A Ballet Brut examined what happens when non-dancers dance. With Rambo Solo, the same enthusiasm for handmade, no-brow culture is evident, and as ever, it's shared with a refreshingly small degree of irony. Oberzan sincerely loves First Blood—though he prefers the 1972 novel, which he's read at least ten times—he loves it so much, in fact, that he actually made his own film adaptation in his studio apartment. (Here's the hilarious trailer; the DVD is on sale in the lobby.) 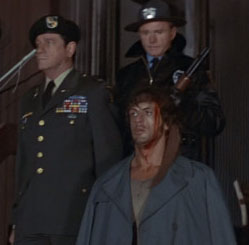 Oberzan's apartment also serves as the backdrop for Rambo Solo; on the wall behind him, three single-take videos depict him raving and reenacting First Blood throughout the shabby studio, all shot on different days. Though his monologue is seemingly spontaneous, it's clear that every misspoken word and smattering of conversational filler is meticulously scripted, as Oberzan's live performance actually syncs up with the muted video. The effect is not only impressive, it underscores Rambo Solo's themes: how we take other people's stories and make them our own, and how they change in the telling.

In a fun Time Out video tour of Soho Rep, which has been radically reconfigured for Rambo Solo, co-director Kelly Copper describes Rambo Solo as "a celebration of digression." And at times, Oberzan reminds one of the excitable stoned geek whose rambling you indulge because he keeps passing around the primo herb. But there aren't any drugs proffered here; Oberzan pulls it off on the strength of his quirky charm and guileless passion for a beloved book, which he keeps onstage in a plastic bag. In fact, he's so persuasive that we're searching for a copy of our own, as soon as we finish working on our own magnum opus: Die Hard Solo. (For that, you'll definitely need drugs.)

(A note: I'm not sure I would have enjoyed Rambo Solo as much had I not requested a chair; the seating is on a carpeted floor with pillows. And if you haven't watched First Blood in a while, I'd recommend renting it before Rambo Solo; it's my opinion that a fresh recollection of the movie enhanced the experience.)

#nature theater of oklahoma
#rambo solo
#theater
Do you know the scoop? Comment below or Send us a Tip