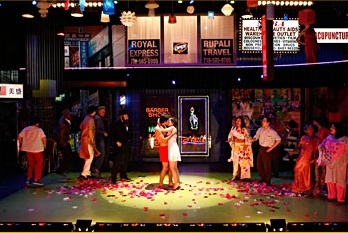 In Charles Mee’s Queens Boulevard (the musical) the titular traffic artery is no longer the “boulevard of blood” notorious for hit-and-run collisions. In fact, there isn’t a drop of blood in Mee’s colorful fairytale, which takes as inspiration the centuries old dance-drama style of Hindu theater called kathakali, among other things. In Mee’s eyes, Queens Boulevard is the symbolic common thread connecting New York’s myriad ethnicities and cultures, with Queens as the proverbial melting pot par excellence. His fondness for this jumble of nationalities is apparent as soon as one enters the Signature Theatre, which is crowded with an eye-popping array of neon lights, dime-store mannequins, and colorful signage for the kinds of small businesses found in many first-generation outer-borough neighborhoods: discount beauty aids, acupuncture, mom and pop drug stores.

The picaresque story is taken from the kathakali play The Flower of Good Fortune (itself an adaptation of a Mahabharata tale). Since Mee’s distinct approach to playwriting emphasizes a synthesis of various source materials, Queens Boulevard is also spiced with bits of Homer, Joyce and, according to a note in the program, “internet blogs from the neighborhood of Queens.” It’s not usually clear when different texts are used in the 105 minute musical, but “name-that-allusion” isn’t the point. Mee’s rich collage of sources is itself a fitting metaphor for the swirl of identities in Queens, a borough with 46% foreign-born residents. Even the music, which swerves from hyper Indian ragas to contemporary dancehall tracks by M.I.A. to Iranian and Irish folk songs, serves as a vibrant tribute to diversity. If that sounds a little PBS tote-bag, rest assured that Queens Boulevard is a rollicking good time.

The story takes place on the wedding day of Vijay, an Indian-American and Shizuko, a woman of Japanese descent. After the play’s festive beginning at the wedding reception, Shizuko withdraws to take a nap and Vijay goes out in search of a flower that his bride admires, the rare “flower of heaven” that none of the vendors on the bustling Queens sidewalk have heard of. But while shopping, Vijay is sidetracked by his grieving friend Abdi, pushing his newly deceased mother’s coffin to the cemetery. Instead of returning home for his wedding night, Vijay finds himself sidetracked into an increasingly absurd series of adventures, leading from his guilt trip to Abdi’s mother’s funeral, to the boozy wake and onward to the Russian baths and nightclubs. Along the way, the talented ensemble dashes in and out of costumes to portray the many classic Queens characters Vijay and Abdi encounter. Mee’s discursive fairytale may be a bit short on narrative tension, but it’s packed with enough boisterous song, dance, karaoke and madcap humor to sustain its circuitous tour through the vibrant county of Queens.