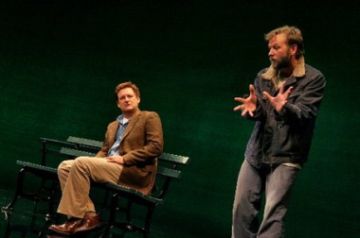 Edward Albee’s 1958 play The Zoo Story was a watershed moment in American theater, despite being ignored for two years by New York producers. Though the riveting two character play marked the arrival of a significant new American voice, it first premiered in Germany; not until 1960 was The Zoo Story performed in the U.S, and then not even in New York, where it’s set. Albee’s breakthrough one-act concerns a random, ultimately violent encounter between Peter, an affluent book publishing executive, and Jerry, a logorrheic passerby who interrupts Peter’s lovely afternoon of reading in Central Park. It marked a stunning beginning to Albee’s career, one that has mined an inexhaustible vein of menace found neatly coiled inside even the most benign relationships. The clash of social classes, values and lifestyles is depicted vividly but with intriguing ambiguity in The Zoo Story; the play's cryptic, evocative atmosphere would set the tone for the rest of Albee’s unique oeuvre.

Now on the cusp of 80, Albee is still writing and The Zoo Story is still being performed – an enthralling new production stars Bill Pullman as Peter and the terrific Dallas Roberts as the unhinged Jerry. But the revival is also a premiere of sorts; six years ago Albee decided to write a companion piece to The Zoo Story called Homelife. As the title suggests, it offers a glimpse into the well-appointed apartment in the East ‘70s that Peter shares with his wife, Ann. In a playwright’s note, Albee explains how The Zoo Story became a two-act play after 49 years of frequent performance:

It nagged me just a bit that it seemed to be not quite a two-character play – Jerry being so much longer a role – but more a one-and-a-half-character one. But the play “worked,” so why worry? Six years ago, however, I said to myself “There’s a first act here somewhere which will flesh Peter fully and make the subsequent balance better.” Almost before I knew it, Homelife fell from my mind to the page…intact.

Homelife ably accomplishes Albee’s goal of fleshing Peter fully; as performed by Pullman and Johanna Day, the one-act provides an amusing glimpse into the polite little world for which Jerry shows so much contempt. But the married couple soon find themselves tumbling out of what had been an ordinary Sunday afternoon and into a searing exchange of brutally honest opinions and long-kept secrets. Despite the sexually graphic nature of the revelations, Homelife maintains a sort of cool, breezy charm, thanks in part to the finely honed characterizations of Pullman and Day. The two are perfectly matched here in a play that might seem lacking in narrative payoff – that is, were it not for the wild things in store for Peter once he sets off for the park with his book.