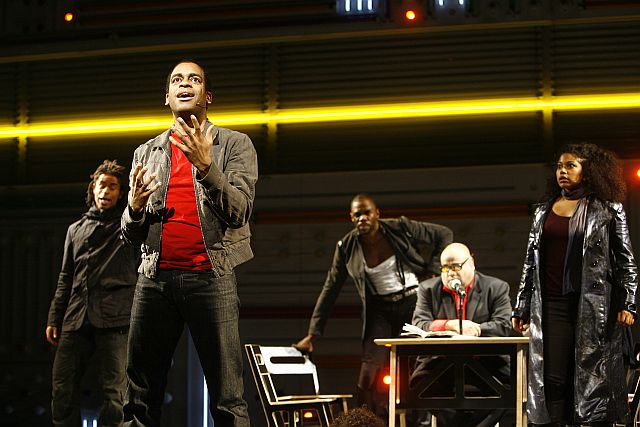 I hate going to Broadway shows: fighting through the mobs in Times Square, being herded into the theater like livestock, cramming into a tiny seat while feedback from hearing aids and hacking coughs reverberate on all sides. Admittedly, I’m a world-class grouch when it comes to these things, so it’s no faint praise that I’d eagerly subject myself to it again for Passing Strange, the multidisciplinary rock musical that just blazed onto Broadway. It’s a phenomenal experience that deserves a run ten times longer than Cats and Phantom combined.

Now, if the words ‘rock musical’ evoke dreadful associations of watered-down, vanilla pop pabulum, rest assured that the rock in Passing Strange is the real deal; funky, electric, thumping, progressive, exhilarating. As the show starts, the keyboardist, bassist and guitarist sink down rocking into the mostly bare stage and Stew, the night’s narrator, singer, guitarist and ringleader, steps to the mic to set the tone: “The only part of the newspaper I read today said it was Saturday. It is Saturday night, right?” The crowd goes wild; it sure is Saturday night, but is this really Broadway?

Passing Strange is Stew’s semi-autobiographical account of growing up black middle-class in L.A. and his subsequent adventures as a young man discovering the value of American street cred in Western Europe. The hilarious Daniel Breaker plays the young Stew as he transforms from a bored bourgeois black kid to a card-carrying member of Berlin’s avant-garde art rock scene. Along the way, the propulsive score – composed by Stew and the show’s bassist Heidi Rodewald – rarely lets up; swerving from crazed punk to Gospel to soul to funk without losing coherence. With a dazzling ensemble featuring the sensational Colman Domingo in multiple roles, Passing Strange is an ingeniously staged tour through the disorienting funhouse of African American identity. And what a fun, strange trip it is – one you’ll probably want to take more than once, Broadway be damned.