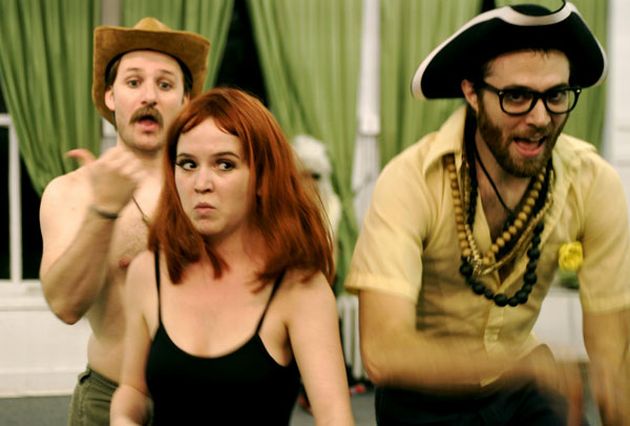 Caution: Half the bathrooms at the Tribeca venue currently hosting Nature Theater of Oklahoma’s No Dice are designed for children; the tiny toilets and sinks hover inches above the floor and may give adult users a disorienting sense of vertigo. The actors’ dressing room, which opens directly onto the performance space, is marked with a laminated sign that declares: “No Adults Are Allowed in the Bouncy Castle!”

The company inherited these elements from this largely untampered-with “found” space – a former indoor playground – but the atmosphere they evoke is undeniably serendipitous: it points to the spirit of exuberance that distinguishes No Dice, like the way children eschew an expensive toy for the cardboard box it came in.

In that analogy, the “expensive toy” would be some monolithic narrative concocted by a singular playwright and the cardboard box would be what Nature Theater has selected as source material for No Dice: over 100 hours of tape recorded telephone conversations between the actors and their friends and family. The tapes have been decanted down into three and a half hours of mostly banal chitchat about temp jobs, eating habits, and social plans. The ensemble then approaches this quotidian banter with a heightened, melodramatic acting style, choking their lines in a halting manner as though the words were foreign objects tumbling from their mouths.

Exchanges like, “‘I think Cary Grant was a great actor!’ ‘Why!?’ ‘Because I’ve seen his films!’” are unleashed as stunning revelations, with a passion mercifully devoid of ironic, smirking commentary. The intent is not to laugh at these documented exchanges, but isolate them and hold them up to the light; which is often funny, but not in a condescending way.

The extremely idiosyncratic production is loosely presented in the format of amateur dinner theater (with sandwiches served before the show and wine and dessert at the interval) and also “epic theater”; a nod to Bertolt Brecht’s theatrical aesthetic, in which the audience was never to lose themselves in escapist melodrama. Brecht later developed this concept into what he called “dialectical theater”, which is equally applicable to the approach in No Dice, in that they’ve taken seemingly boring chatter and used it as a catalyst for explosive, physically spastic performance.

The lively result is often hilarious but also, in the end, surprisingly sublime. For the first couple hours – and they really do fly by – it’s great fun to watch the actors in their goofy costumes, executing bizarre physical gestures as they struggle to communicate the most commonplace sentiments with a feverish, bug-eyed passion. But by the last hour a sort of hypnotic intimacy sets in; there’s much more than absurd playfulness informing their bouncy castle. As they revel in the vast expanse between the banal and the epic, the house lights stay almost constantly up, affording little escape from the evidence recorded on tape: our everyday stabs at self-expression fall so short of comprehension, but there’s a poetry in them all the same.

#Arts and Events
#children
#friends
#jobs
#nature
#Nature Theater
#naturetheaterofoklahoma
#No Dice
#nodice
#oklahoma
#review
#sohorep
#theater
Do you know the scoop? Comment below or Send us a Tip