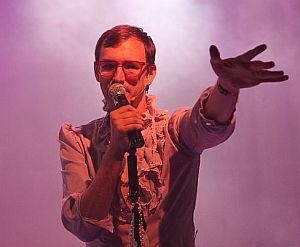 Wow, this show is bizarre. But bizarre in a way that carries on P.S. 122’s scintillating legacy as a downtown refuge for freaky, outré performance art. Musician/performer Neal Medlyn’s latest rock "tragic-comedy," Unpronounceable Symbol, pays musical homage to Prince, with a live band led by Kiki & Herb’s Kenny Mellman, who co-wrote the show and rearranged a bunch of Prince B-sides for the score.

Over the years, Medlyn’s developed quite a cult following with his idiosyncratic performances, which have previously used the back catalogs of artists like Phil Collins and Lionel Richie as a springboard into his own warped delectations. On opening night his fans packed P.S. 122 to celebrate every ribald twist in his latest saga. There’s really no reason why the fantasia of an awkward, bespectacled, bi-sexual white boy from Texas should elicit such frisson, but Medlyn is so brazenly committed to his own deeply eccentric vision that you can’t help but cheer him on.