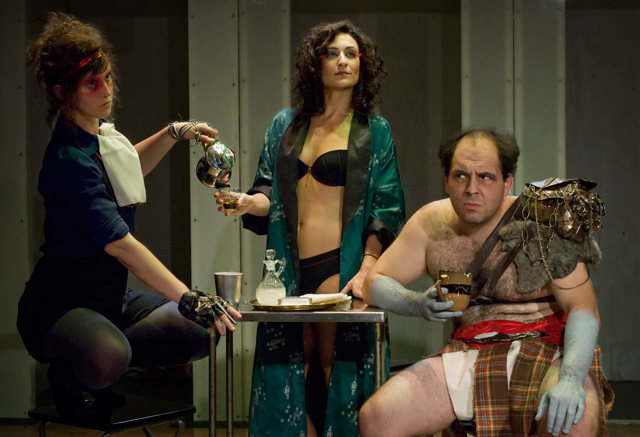 In Joseph Campbell's hugely influential work of comparative mythology, The Hero With a Thousand Faces, the world's hero myths are boiled down to three narrative stages: the action, the trials, and the hero at home. But what about that fourth stage, when the retired hero is puttering around the house with no greater trial than cleaning the leaves out of the gutter? In mythic figurations: a power triptych, the plight of the washed-up hero is milked for steady laughs by Ilan Bachrach, who plays "The Warrior," a shirtless slob with a hairline that's receding as steadily as his odds of ever slaying a dragon again.

The Warrior spends his time hanging around what seems to be an inter-dimensional hero headquarters, rhapsodizing about the good old days by showing poorly-drawn illustrations of his conquests on an overhead projector. But to the busy, disinterested receptionist (Theresa Buchheister), he's just in the way; she's got her hands full supporting heroes still in their prime, namely a seductive assassin played with icy ruthlessness by Vonia Arsianian. All The Warrior wants is one more shot at the big time, but none of the boxes that tumble down the chute have his name on it, and he's lost the chutzpa to just take one.

Presented by Title: Point Productions as part of the indispensable Ontological-Hysteric Incubator series, this multidisciplinary piece is distinguished by quirky performances and a meticulously detailed production design. Brendan Regimbal's video and sound design is richly hypnotic, Miranda Hardy's lighting is dramatically unpredictable, and Peter Ksander's set elevates the performers onto a raised platform five feet in the air, with a creaky linoleum floor, a toaster oven, and three upstage dressing rooms where they periodically withdraw to contemplate in silhouette. The overall effect is otherworldly and narratively abstract, but the whole thing stays amusing and accessible on the strength of this idiosyncratically engaging ensemble.