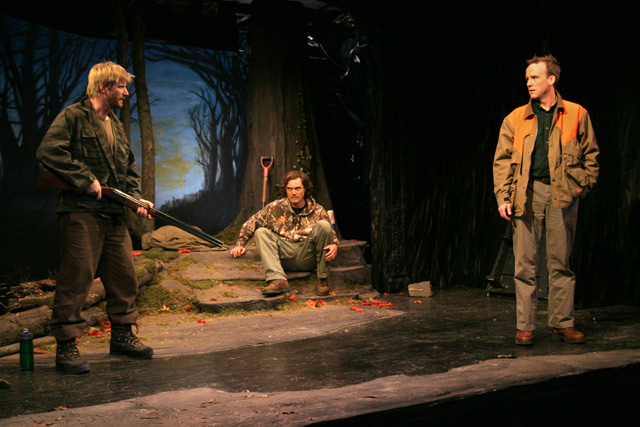 Note to self: When heading off into the woods with a group of rifle-toting friends from childhood, leave stuff like politics and infidelity off the list of discussion topics. In Craig Wright's modest one-act Lady, the voluble and disgruntled Dyson (Paul Sparks) just can't keep the conversation light. A passionate liberal college teacher in small-town Illinois, Dyson blames his old friend Graham (David Wilson Barnes), a congressman, for inspiring his 18-year-old son to join the marines. Kenny (Michael Shannon), the third amigo, is the ineffectual stoner peacemaker caught in the crossfire with his dog, the titular Lady.

The trio has met up at the crack of dawn for their annual hunting trip, and as Kenny and Dyson wait for the tardy Graham, the trigger points for the day's drama are exposed. During the previous night's gathering at the local Elk's Club, Dyson excoriated the Democratic Graham for tacking right and supporting the president's war on terror. Later, Dyson's son told his father he was ashamed by his supposed lack of patriotism and had decided to drop out of college to enlist.

Once the old friends are fully assembled, it's only a matter of time before the guns go off, loudly and fatally. Thankfully Wright, who created the ABC series Dirty Sexy Money, is smart enough to keep Lady from devolving into a maudlin political diatribe. The dialogue is sharp and funny, and the performances are all excellent, but there's just not enough meat on the bone; the narrative is insubstantial. The script would have been better served as one episode in the season-long arc of a television series. There's really no reason why this needs to be an 80 minute play, except for the chance to watch these three superb actors fire off incisive dialogue and shotguns in an intimate theater.