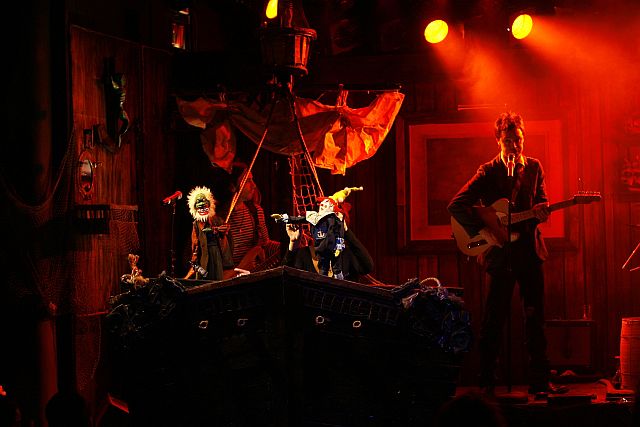 Do you enjoy ingeniously crafted rock tunes with clever lyrics and arrangements for accordion, keyboard, ukulele, guitar, bass and drums? Do you like pirates? How about puppets? Rum based drink specials? Laughing until your sides hurt? If you answered yes to even one of these questions, you’re ready to set forth on the dread ship Jollyship the Whiz-Bang, the rollicking “pirate puppet rock odyssey” that’s currently docked at Ars Nova.

Personally, I don’t need to hear anything more than ‘pirate puppet rock’ to get excited, but the cynic in me was a tiny bit worried I’d signed up for a half-assed execution of an inspired concept. But creators Nick Jones and Raja Azar have been polishing this project since 2002, and it gleams as brilliantly as One-Eyed Willie’s treasure. The sharp seven member ensemble switches off between instruments and puppets with assured finesse to tell this ironic tale of a sodden pirate captain who can’t tell the North Star from the sun, and his five year quest to find Party Island, where “the rum flows down the valley twixt salt taffy mountains.”

Of course everything goes deliriously wrong. The cabin boy, who holds the captain’s heart medicine (as well as his heart) disappears; the crew grows disillusioned and longs for rape and plunder; the captain finds religion through a pious crab. Nick Jones has a gift for twisting his dialogue to surprising degrees of absurdity, and he’s assisted here by some charmingly goofy puppets built by Paul Burn. Donyale Werle’s set is as delightful as it is economical and Sam Gold’s direction keeps the ship surging forward so briskly that you don’t have time to realize it’s not actually going anywhere. If there was a message buried in all this silliness, it might be that Party Island is a state of mind – albeit one that’s only enhanced by rock, laughs and pirate puppets.

#ars nova
#comedy
#Jollyship the Whiz-Bang
#musical
#pirates
#play
#puppets
#review
#rock
#show
#theater
Do you know the scoop? Comment below or Send us a Tip