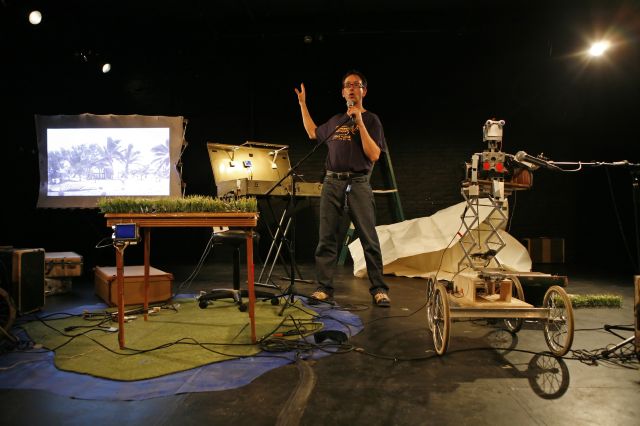 On his birthday in October 2001, theatrical gearhead Joe Silovsky read a story in the New York Times that would become his obsession for the next seven years. Titled, "The Money Is All Gone in Tonga, And the Jester's Role Was No Joke," the article detailed a sensational financial scandal roiling the island kingdom of Tonga in the South Pacific. It had emerged that the king of Tonga had raked in some $26 million selling Tongan citizenship and passports to Hong Kong Chinese who were worried about an impending Chinese takeover. But he had refused to keep the fortune in Tonga because, he said, "the government would only spend it on roads." Instead, the loot was deposited into a checking account at the Bank of America.

Enter Jesse Bogdonoff, an American employee at the bank who convinced the king to invest the money in a pool of insurance backed investments called viatical contracts, managed by Millennium Asset Management. Viatical contracts, as Silovsky sardonically demonstrates in his rather romantic solo show Jester of Tonga, enable investors to buy the life insurance policies of terminally ill patients in hopes they'll expire sooner rather than later. Long story short, Millennium went bust and cheated the king out of the entire investment, and Bogdonoff, who had been previously declared official court jester, was sued for fraud. (He settled out of court and now works as a traveling salesman for Kangen Water—which "can change your life!")

Silovsky traveled to Tonga to research the show, and he also spent a lot of time with Bogdonoff after tracking him down through a private investigator. The disgraced court jester is humorously portrayed here by a robot programmed to speak with Bogdonoff's actual voice—much of which was recorded during a hilariously long telephone conversation. Silovsky tells the tale with an impressive variety of hand-made machines, puppets, and video, with most of the devices emerging as needed from inside the twenty suitcases littering the stage. One sequence, in which Silovsky recreates his first days on Tonga by rolling a tiny camera through an elaborate diorama of the island, is particularly enthralling. And although the production begins rather dully with a languid, overly-long stick puppet sequence, it gradually won me over, especially once Silovsky's robot rolled out to upstage its maker.

#Jester of Tonga
#ps 122
#review
#theater
Do you know the scoop? Comment below or Send us a Tip
A new Gothamist is coming! We’ve moved comments over to our beta site. Click here to join the conversation and get a preview of our new website.