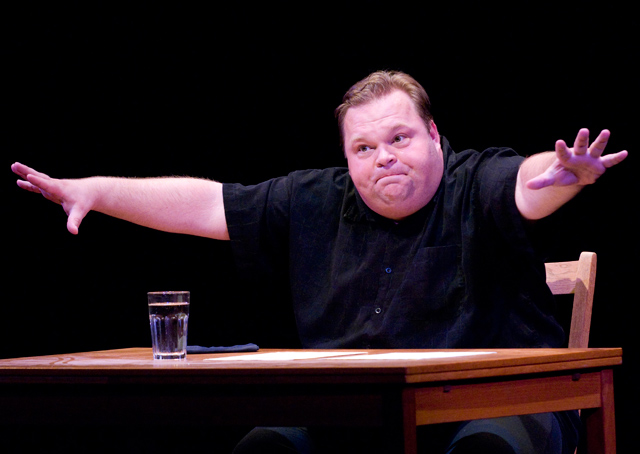 In Los Alamos New Mexico, there's a man named Ed Grothus, who for many years worked at the nuclear research laboratory until being dismissed in the '60s after participating in a peace march. But instead of leaving the nuclear company town that is Los Alamos, Grothus stayed put and began amassing all sorts of surplus junk discarded by the labs. His collection, called The Black Hole, is now incalculably vast, and has become a pilgrimage destination for technology geeks, pacifists, and atomic tourists. Mike Daisey, the monologist, went there too, and after seeing his new solo show, If You See Something Say Something, I feel like I was there with him.

At The Black Hole, Grothus shows Daisey a bootleg video taken during orientation at one of the Los Alamos labs, and Daisey is struck by the linguistic tics of the bored man discussing all the different weapons they've designed to kill "the bad guys." Like me, he always thought that pejorative was used strictly for the public's benefit, to keep things simple. Turns out it's an industry term too, and it underscores the timeless need to demonize anyone on the receiving end of violence. By that reasoning, the 200,000-plus civilians killed at Hiroshima and Nagasaki must have been bad guys, too. How else do you expect bomb builders to sleep at night?

Daisey's ninety minute monologue is a funny and fascinating exploration of the American nuclear arms industry and our current Homeland Security misadventures, made personal by his vivid first-hand account of visiting the Trinity test site in New Mexico. There he eats the worst hamburger on Earth (coated with radioactive dirt); chats with an Army vet outraged at the private security company running the site; and buys some T-shirts, a coffee mug and a mushroom cloud key chain, which he suspects some tourists will actually use for their keys without any appreciation of their absurdity.

At the beginning of the piece, Daisey posits that the "story of security is the elimination of metaphor." At an airport, to say the word bomb gets the same reaction as if one were to set off a bomb. In that sense, it's the "word made flesh." In an interview, he explains: "I am a large person, and I believe there is a great value in large ideas and large emotions communicated on the stage. I believe there is value in tackling 60 years of American security in one monologue." Tackle it he does, with the brio of a brilliant raconteur you want to keep buying drinks just so he'll keep talking.