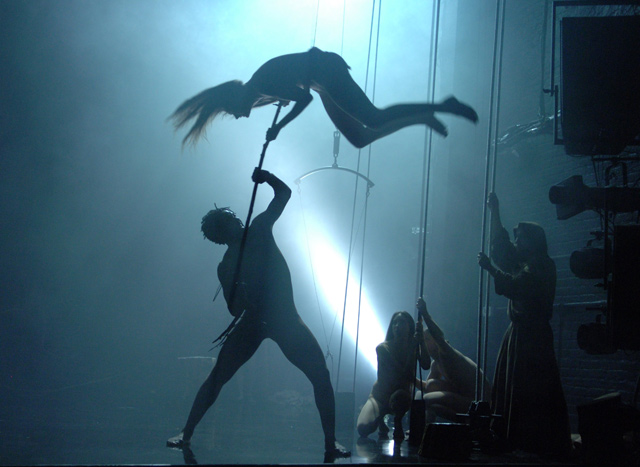 The Garden of Earthly Delights, Hieronymus Bosch’s famous 16th-century triptych of innocence, licentiousness, and perdition, is the kind of astonishingly detailed masterpiece you can get lost in—each panel is packed with so much extraordinary activity that it's a challenge to take it all in as a whole. Which is part of the reason why choreographer Martha Clarke's dance-theater interpretation of the painting is so compelling; by channeling the spirit of the painting into live performance, the audience can immerse itself in the overall essence of Bosch's startling vision.

Clarke's bold adaptation originally premiered in 1984, was re-staged again in 1987, and has now been brought to life a third time in New York City more than two decades later, in a sumptuous production that was nearly scuttled due to financial woes, according to this harrowing article in the Times. Thankfully, they came up with the money, because New Yorkers who missed it in the '80s deserve another chance to experience this transporting study of human glory and depravity. The hour-long, wordless performance isn't a literal recreation of the triptych (which would be silly), but rather a ritualistic celebration of eros and suffering.

As three musicians in dark cowls perform Richard Peaslee's clattering, dizzying score, an ensemble of eleven dancers in flesh-tone unitards writhe, bound and crawl around the stage to evoke a world as grotesque, sensual and fantastic as that depicted in painting. Periodically, the dancers soar through the shadowy air using harnesses attached to a system of pulleys, and seeing the mechanics of their flight only heightens the drama, because the dancer in the air is intimately connected to his or her partner on stage pulling the rope, making the bond between them almost palpable. Clarke's vision, like Bosch's painting, is at once grotesque and sublime, but the fearless trust shared by the ensemble lends the work an ultimately life-affirming energy.

#dance
#Garden of Earthly Delights
#Hieronymus Bosch
#martha clarke
#minetta lane
#review
#theater
Do you know the scoop? Comment below or Send us a Tip