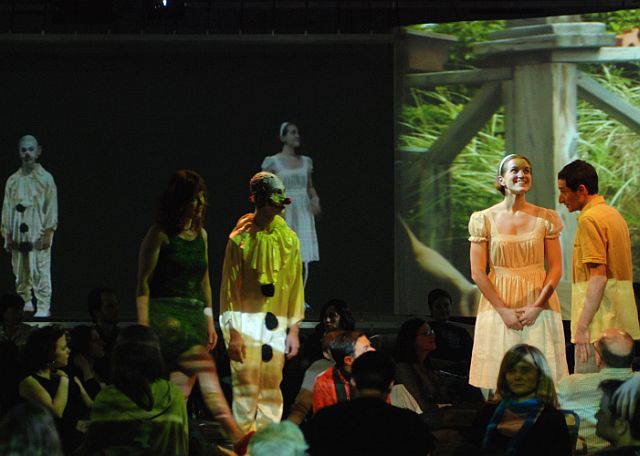 You don’t have to wait until summer to catch sweet some rays out on Fire Island; playwright Charles Mee and a troupe of 108 actors and musicians have brought the beguiling little beach community to Tribeca, where they’ve transformed a cavernous space at the 3LD Art and Technology Center into a beach party of epic proportions. The wholly immersive experience begins as soon as you step inside the theater and realize that not only is there no stage, but there aren’t even any seats: the performers weave their way among the audience members, who recline on pillows or beach chairs.

A rock band, led by Tuvan throat singer Albert Kuvezin, plays in one corner under festive party lights, and buckets of beer and soda are strategically stationed throughout the space; in fact, everyone’s invited to show up two hours before show time for a pre-party. Even when the play starts, it’s not always easy to distinguish actors from spectators, and like any great party, there are usually several interesting things happening at once. The multimedia extravaganza recreates the romantic freedom of Fire Island by mixing live action with ultra wide format HD video shot there last summer, projected on two massive 84 foot wide screens. And on opposite ends of the space, you can marvel at the stunning new Eyeliner technology, which creates three dimensional images with astonishing clarity.

All these different elements are shaken and stirred for ninety minutes of love, sex, frustration and eros, and you can just about taste the ocean salt on you lips. The winning ensemble chases each other among the human sand dunes; a parade of couples falling in love and breaking apart within arm’s reach. There’s no single narrative thread, but it all adds up to a funny and intimate meditation on romantic turbulence – the play might just as well be titled Ring of Fire Island. As it stands, the band’s quirky cover of Joy Division’s "Love Will Tear Us Apart" perfectly underlines Fire Island’s raison d’être: the sea of love is great for swimming, but beware the undertow.

Fire Island continues at 3LD Art and Technology Center [80 Greenwich Street at Rector Street] through May 3rd. Tickets cost $30 and include wine, beer, pop and food.

#3-legged dog
#Charles Mee
#Chuck Mee
#Eyeliner
#fire island
#new york city
#play
#review
#theater
#tribeca
Do you know the scoop? Comment below or Send us a Tip
A new Gothamist is coming! We’ve moved comments over to our beta site. Click here to join the conversation and get a preview of our new website.