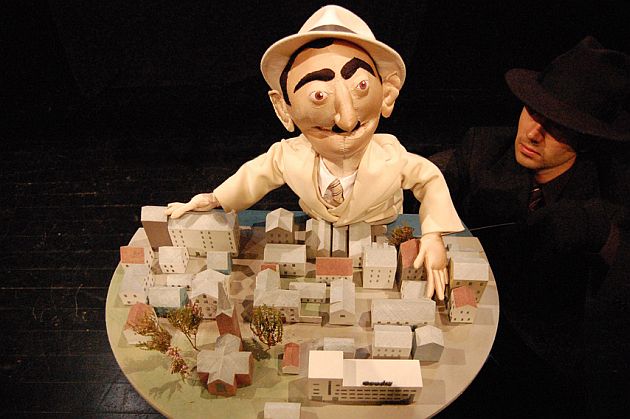 Moritz Rabinowitz was a Norwegian Jewish tailor who, after emigrating from Poland in 1911 to escape pogroms, rose from near-poverty to operate one of the largest clothing empires in Norway. Settling in the small fishing village of Haugesund, Rabinowitz, the only Jew in town, spent his few off-hours feverishly writing columns that warned against the danger of an increasingly anti-Semitic Germany. His portents were largely dismissed by everyone except the Nazis themselves, who pegged Rabinowitz as “the leader of the Jewish resistance in Norway” when they invaded in 1940. He is believed to have been beaten to death while in a labor camp.

All this might seem like heavy lifting for a puppet show, but Fabrik, produced by the talented Norwegian expat group Wakka Wakka, is remarkably buoyant. Their delightfully imaginative hour focuses mainly on Rabinowitz’s life in Haugesund on the cusp of the German invasion, when most of his fellow citizens were still blind to what lay on the horizon. As Fabrik inventively chronicles the daily life of Rabinowitz before the war, the horror of what is to come casts a growing shadow over his bourgeois bliss.

By now it’s a familiar narrative, but the three puppeteers in Wakka Wakka make it fresh with their consistently surprising staging, which I won’t spoil much here. Fabrik is distinguished by an elegant design that evokes much with very little, such as an enthralling dream sequence that depicts Rabinowitz as an airplane shot down by friendly Norwegian fire, then kicked into the sea, where he drifts through depths with a piranha-esque Hitler snapping at his heels. In his dream, Rabinowitz manages to driver Hitler away by blowing loudly on an underwater conch, but even in this magical gem of a show, his actual fate can’t be reinvented.

#As
#Fabrik
#puppet
#review
#show
#theater
#theatre
#tickets
#Urban Stages
#Wakka
Do you know the scoop? Comment below or Send us a Tip