While performing in a Maine summer stock production of As You Like It back in 2006, a few theater buddies noticed a roadside greasy spoon for sale and wondered: Wouldn't it be a gas if a troupe of avant garde performance artists bought the place and turned it into an experimental "dinner theatre"? Three years later, the fantasy has been fully realized as a five course celebration of kooky transgression—they didn't buy the place but took the name (Conni's) and ran with the idea, setting up residency at the Bushwick Starr in, well, Bushwick. But last week they invaded Manhattan for a four night stand at the Ohio Theater on Wooster Street, as part of the Soho Ice Factory Festival. 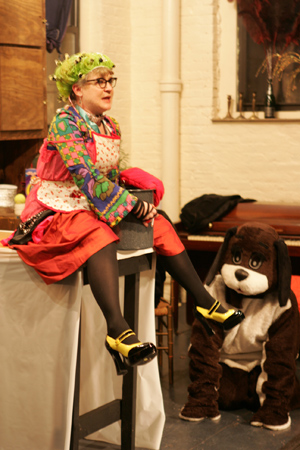 Upon entering the Ohio, guests were encouraged to choose one of dozens of pre-written name tags; I became "Wooster? I Hardly Even Know Her," while others at my table sported such monikers as "Kim Jong Illin" and "Dick Tater." (We were all too late to snatch up "Ass Whisperer.") After a pre-show round of "early bird cocktails," a musical commotion was heard out in the street, and soon an acoustic ragtime band appeared to sing an ebullient number about the rules of the night: Do not refer to the performers as waiters! No ordering! And, most emphatically: This is NOT dinner theatre.

Well, it is and it isn't. The food, prepared from locally sourced, seasonal ingredients in an open kitchen, was almost uniformly excellent; from the chilled gazpacho soup; to the watermelon, mint and feta salad; to the meatloaf (or portobello) sandwiches. (A dense brick of poundcake for dessert was the lone misstep.) Throughout the meal a delirious story (sort of) unfolded, about Muffin Character Hanshake's desire for a child, her kitchen conception, and her inevitable dread about what parenthood might do to her bohemian lifestyle.

Each member of the ensemble, from the cooks to the floor-manager, had a fully developed backstory, and each took their own delicious turn in the spotlight; Muffin's brother, a once famous child star, delivered a particularly hilarious monologue about show-biz bitterness and the time John Larroquette ruined his concept for Night Court. The whole immersive spectacle casts quite a spell, and eventually the strangest thing happened: a table of complete strangers started talking to each other. In New York City!

So Connie's Avant Garde Restaurant does serve dinner and theater—not to mention an audience game show called "Bus That Table!" and several plushies looking for a hug—but obviously this isn't "dinner theater" in the conventional sense of rubbery chicken and Lerner & Loewe for the "Murder She Wrote" set. Though there are no shortage of Borscht Belt one liners (Doctor: I'm concerned about your baby. Muffin: How do you know it's mine?), the troupe is so fanatically determined to eradicate the dinner theatre stigma that within the first five minutes they send a naked man dashing through the diners, on the run from some sexy, half-dressed nurses. No, this is not your grandma's dinner theatre; it's a professionally executed feast of frustrated avant garde ambition, and well worth a trip to Bushwick, or even Maine—which ain't that much further! (Note to Connie: If you're hiring, drop me a line!)

#Conni's Avant Garde Restaurant
#nyc
#ohio theater
#review
#soho ice factory
#theater
Do you know the scoop? Comment below or Send us a Tip
A new Gothamist is coming! We’ve moved comments over to our beta site. Click here to join the conversation and get a preview of our new website.