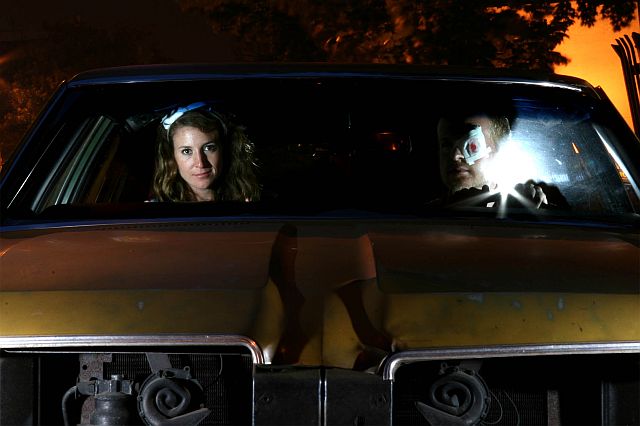 The Debate Society, arguably New York's most charming theater company, is adept at seducing their audience with the atmosphere of whatever locale they choose to evoke. Their latest work, called Cape Disappointment, meticulously conjures up Gothic worlds of lost highways, traveling salesmen, Eisenhower-era teens, and roadside bandits. Designer Karl Allen has done excellent work transforming the upstairs theater at P.S. 122 into a romantically decayed drive-in movie, even installing vintage speaker boxes throughout the audience. And to complete the scene, free bags of popcorn are distributed—noisy, crinkly bags that maddeningly break the spell just like at the cinema.

The hour-long performance is comprised of several episodic stories that bear no literal connection, but all share the same creepy, black-and-white horror movie vibe. Two kids en route to retrieve their aunt at the train station run out of gas and get lost in the woods, a pedophile picks up a runaway girl and takes her on a Lolita-esque road trip, a couple of corny linoleum salesman are conned by an old crone and her gimpy daughter. But to summarize the narratives is to miss the point: What's compelling about The Debate Society is their embrace of theater's potential to engage the collective imagination. For instance, simply by playing with perspective and light, a wooden fence can become a floorboard through which the pedophile stares up skirts at his neighbor's house. (If that sounds appalling, rest assured the pervert gets a hilarious comeuppance which I won't spoil here.)

In previous Debate Society productions, director Oliver Butler has relied on the talents of just two brilliant performers: Hannah Bos and Paul Thureen, who slip in and out of myriad characters to create the illusion of a vast ensemble. Here the cast is doubled with the addition of Michael Cyril Creighton and Pamela Payton-Wright, and the result is mixed. Much of the company's appeal lies in the exhilarating chemistry between Thureen and Bos, which is diluted a bit here. The two newcomers are both fine actors, but the idiosyncratic theatrical language that Bos and Thureen have cultivated over the years might be better left concentrated. That's not to say Cape Disappointment lives up to its title; even a slightly uneven Debate Society show is filled with more funny and spellbinding moments than just about any other production on or off Broadway, and this is no exception.