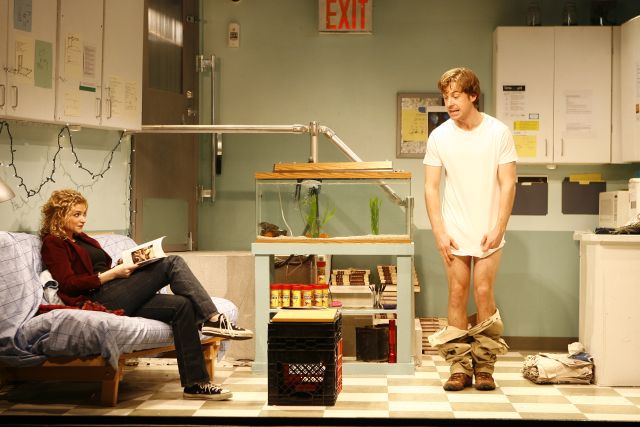 Writing about Peter Sinn Nachtrieb’s marvelous Boom is going to require a bit of bomb squad finesse: after the first twenty minutes, the action takes such an unexpected left turn that to describe it without spoilers won’t be easy. And that’s not to say those first twenty minutes are very conventional, either; the play begins when a woman with a nametag that reads Barbara (Susan Wands) welcomes the audience with all the brittle enthusiasm of a stressed-out flight attendant, before taking her station stage right next to a kettle drum, cymbals, red phone, and, attached to the wall, a few huge retro switches fit for an executioner. 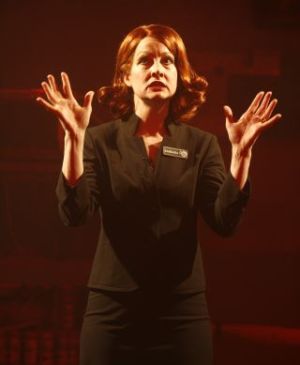 Something’s not quite right about the mysterious Barbara, but there’s no time to think about that, because the stage curtain immediately pulls back to reveal Wilson Chin’s impeccably detailed set, a brightly lit basement laboratory/studio apartment, with a fish tank whose vast significance is only revealed in Boom’s final, inspired moments.

Admiring the fish are Jo (Megan Ferguson), a college-age university student, and Jules (Lucas Near-Verbrugghe), a marine biologist who has lured Jo to his compound for what she believes to be a Craigslist “Casual Encounter.” But as Jules resists her instructions to strip and screw, it becomes clear that something’s not right here, either. Don’t worry – Jules, played with feverish hilarity by Near-Verbrugghe – is not some clichéd serial killer. Quite the opposite, but to tell you more would suck the surprise out of Boom’s delirious twists.

And it would be a disservice to divulge much more about Barbara, who insinuates herself into the action with her big electrical switches, percussion and one wickedly funny evening-length breakdown. As directed by Alex Timbers, the mastermind behind Hell House and other hits, and performed by this exhilarating trio of actors, Boom is a virtuoso tour de force; perhaps the most brilliant show I’ve seen so far this year, aside from Passing Strange.

But maybe it’s not risking too much to note one salient detail: A piece of paper with the word NO scrawled on it, taped up next to the lab’s emergency exit sign, becomes the perfect winking symbol for Boom’s second half. It’s Jean-Paul Sartre meets George Saunders; hell is other people, and people, above all things, are gloriously absurd.