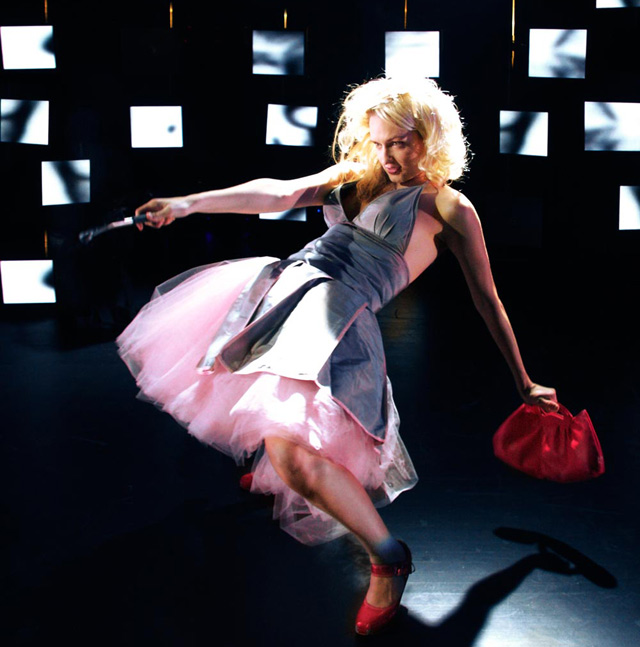 If you like a little sensual touch with your performance art—and really, who doesn't?—be sure to sit in the first row at BLIND.NESS, the dark and steamy new dance-theater piece by WaxFactory at P.S. 122. One dude up front who received a prolonged nuzzling from performer Erika Latta was overheard gushing as he walked out, "That was the best play I've seen in a long time!" I wouldn't go that far (then again, I was in the fifth row), and BLIND.NESS isn't so much a play as it is a dense multidisciplinary collage, but it does succeed as an uninhibited exploration of eros and all its attendant agony.

The strange spectacle begins with the electrical rasp of flickering overhead lights as the empty space is overtaken by four idiosyncratic performers: Latta in a kimono, Melody Bates evoking a malfunctioning android cocktail waitress, Gillian Chadsey suggesting a post-apocalyptic assassin who gets repeatedly shot, and Breeda Wool as a fragile, Kennedy-era socialite with an infinite array of panties to pull down. They gyrate through the room in a sort of four ring circus of anxiety and seduction, each with their own distinctive physical vocabulary that occasionally aligns in a strikingly coreographed unity. Each is a lost soul, taking turns at the mic to unleash confessions or text lifted from such sources as GG Allen's "I Wanna Fuck your Brains Out" and that Garbage song from Romeo and Juliet.

As a whole, it's 50 minutes of oscillation between creepy and sexy, and includes such memorable tableaux as Latta devouring a whole papaya without swallowing; Chadsey disappearing into a big black garbage bag; Wool contorting her face into a grotesque knot, then losing her skirt and sliding a hand down her panties; and a long string of drool descending from Bates's lips to the stage floor like honey. If you're turned on by that infamous scene between Dennis Hopper and Isabella Rossellini in Blue Velvet, you'll go wild for this.

What makes BLIND.NESS compelling, besides the ensemble's bold physical expressiveness, is the tension between the come-on and the fall-out, between the random erotic encounter and the emptiness that can crush you the day after. In an article about the piece in The Brooklyn Rail, Wool compares its sensual atmosphere to Y Tu Mama Tambien, a film that “leaves the audience thinking, ‘Damn, I want to go have sex with someone.’” But isn't that the default position of most New Yorkers? BLIND.NESS is interesting because it turns you on and off simultaneously, making you wonder, for a minute at least, whether Cupid's arrow is worth the sting.

#blindness
#downtown
#new york
#ps 122
#review
#show
#theater
Do you know the scoop? Comment below or Send us a Tip