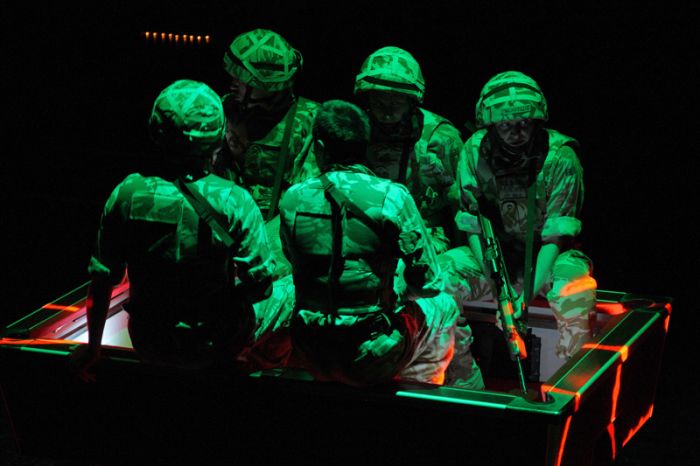 Scotland’s Black Watch is an elite military regiment whose history stretches back almost three centuries. The regiment most recently saw action as part of the British Army’s deployment in Iraq, where seven members lost their lives – five of the men in the space of 11 days in 2004. The National Theatre of Scotland tracked down some of the Black Watch soldiers upon their return to Scotland and, over the course of several months and countless pints of Guinness, playwright Gregory Burke got the men to open up about their experiences. The stories they told, as well as the way they told them, have been woven into a dazzling tapestry of warfare, as seen through the hardened eyes of this now-fading regiment.

What at first seems to be a naturalistic docudrama, set in the village pub where the soldiers gave their testimonials, soon explodes into a visceral, from-the-hip view of life in Iraq at Camp Dogwood, during the time of their worst casualties. The staging for Black Watch divides the audience into two groups sitting on opposite sides of a long, wide runway. According to a director’s statement, the intention was to recreate the seating arrangement of a drill hall, but the choice also points toward the polarization of contemporary politics, with soldiers and civilians perpetually caught in the middle. Black Watch ultimately adds up to a powerful indictment of the Iraq catastrophe, but it does so without tendentious polemics, by honestly depicting the experience of Iraq from one vivid vantage point. Through imaginative showing, not telling, the play resists any temptation to editorialize against the war – the war does that on its own.

Black Watch bursts with so many aesthetic surprises that it would be a shame to spoil them. Suffice it to say that the show’s sumptuous integration of emotional song, vigorous dance, intense marching, large-screen video and acrobatic stage combat is pure theatrical catnip. (Though it must be said that one hour and 50 minutes without a chance to stretch or go to the bathroom is just too long.) Fortunately, I was able to look beyond my sore ass and aching kidneys to enjoy the production, and not just for its stirring pathos: Black Watch is spiced with the detailed, darkly comic flavor that distinguishes all great war stories. For instance, it comes to light that one of the regiment’s favorite sports is a little game called “toby tig”, a version of tag in which one soldier slaps his dick against any sleeping soldier’s face. Thus rudely awakened, the recipient is “it” until he can toby tig another in his sleep. Details like these reveal an endearing sense of absurd, sardonic humor that reverberates through the play all the way to the bitter end, when the lads of Black Watch finally drink their share from Iraq’s bitter cup.