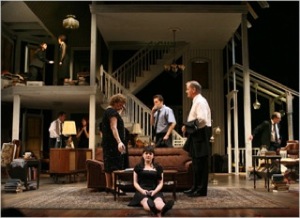 It’s not Tracy Letts’s fault that his play, August: Osage County, has been breathlessly overhyped by the critics, from the Times’s Charles Isherwood on down. It’s also not his fault that compared to many other Broadway spectacles the play stands out as a polestar of humor and intelligence. Still, it’s difficult to disassociate the play from the deafening buzz; August: Osage County is being heralded as an Important Theatrical Event, when it’s really just a well-crafted new play that happens to stand out among Broadway’s other lowbrow pygmies. (Tom Stoppard’s Rock ‘n’ Roll is well acted but as affectless as it is thought-provoking; the current revival of Harold Pinter’s The Homecoming is absolutely magnificent but, obviously, not the New American Drama critics lust after.)

So it falls to Letts to be the critically acclaimed New Dramatic Voice of America, an absurd plaudit that, for various reasons, only Broadway voices seem eligible to receive. Letts’s previous play Bug was somewhat recently adapted to a film, and it’s easy to see how August: Osage County, a sprawling, three hour domestic dramedy, could be given a classy, cable TV treatment. The bitterly funny saga concerns the haphazard reunion of a delightfully dysfunctional Oklahoma family, drawn back together by the sudden disappearance of the patriarch, an alcoholic poet-turned-teacher. Set in a towering, three-floor pile designed by Todd Rosenthal, the extended Weston family crashes back together in a blaze of acrimony ignited by the nasty abuse of Violet, the prescription-drug addicted matriarch.

When she’s not lost in a druggy delirium, Violet busies herself by issuing scathing indictments on her three grown daughters: Barbara for moving away to Colorado with her philandering professor husband, Ivy for staying single past 40, and Karen for introducing her unctuous, thrice-married fiancé during their family crisis. Letts’s script turns on a dime from darkly hilarious to breathtakingly dark, and he succeeds in connecting Violet’s cruelty to her hard childhood of Plains poverty. But while his expansive portrait is vividly drawn, there is a significant absence of the mystery and ambiguity that distinguished his previous hit, Bug, and also the work of predecessors like Edward Albee. The fractured family falls apart on rather predictable fault lines of incest, addiction and adultery, and the demolition feels all too flat and familiar.

You’d think, judging by the praise, that a wild new playwright on the level of Sam Shepard had rocked the world of theater; what we have instead is a well-paced tragicomedy by a reliable writer, passing through Broadway on its way to a Hollywood makeover. The Times’s Isherwood may be right when he declares August: Osage County “the most exciting new American play Broadway has seen in years.” But that says a lot more about Broadway than the play, and nothing about the truly exciting work happening in theater today, on stages far off the Great White Way.