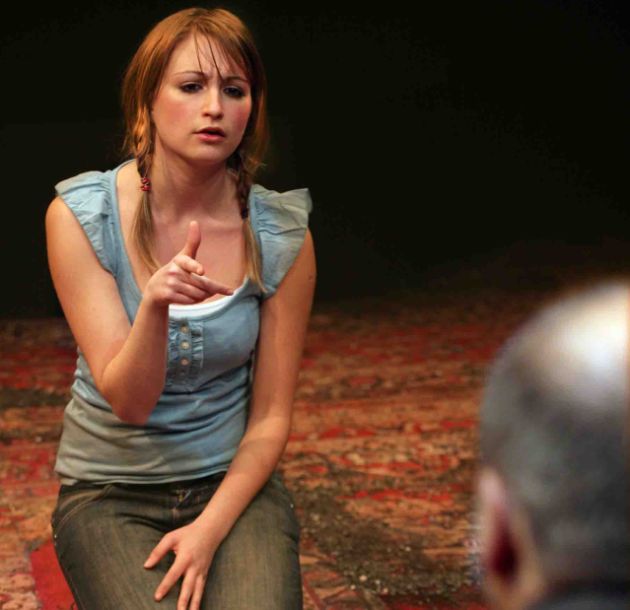 Mike Bartlett’s modest dramaArtefacts, in town as part of the Brits Off Broadway festival, peers into the abyss of post-war Iraq society through the eyes of the aptly named Kelly, an indifferent English teenager played with nervy brio by Lizzy Watts. Kelly’s ordinary life with her single mom (Karen Ascoe) is upended by the sudden appearance of the father she never knew, an erudite Iraqi named Ibrahim (Peter Polycarpou) who runs the National Museum of Baghdad. Ibrahim has just an absurd ten minutes to introduce himself before catching a flight back to his war-torn home, but the eventful encounter climaxes when Kelly callously smashes his reconciliation gift: a priceless Mesopotamian vase he “borrowed” from the museum.

Kelly wants nothing to do with him, even after learning that her mother has been hiding the heartfelt letters he sent over the years. But when the strife in Baghdad engulfs Ibraham’s family, Kelly’s latent righteousness rises to the fore, and the story follows her to Iraq with the remnants of the ancient artifact, which is needed to pay a ransom. To his horror, Ibrahim finds that she’s tried to reassemble it with Superglue, and in an exchange that neatly sums up Bartlett’s premise, he bitterly asks Kelly, “The British make good glue, don’t they?” When she answers yes, he retorts, “Because they are always breaking things.”

If the story and symbolism sound a bit contrived, they are. But there is also an understated British elegance here, and what may on paper seem overwrought is delivered with a dignified mix of passion and reserve. Moodily staged in the round in a smoky room lined with charred Persian rugs, the superb cast deftly draws you into their snarled crises, where the link between the personal and the political can no longer be ignored. If Bartlett’s message is a bit too heavy handed at times, his lively ensemble saves Artefacts from cracking under its own weight.