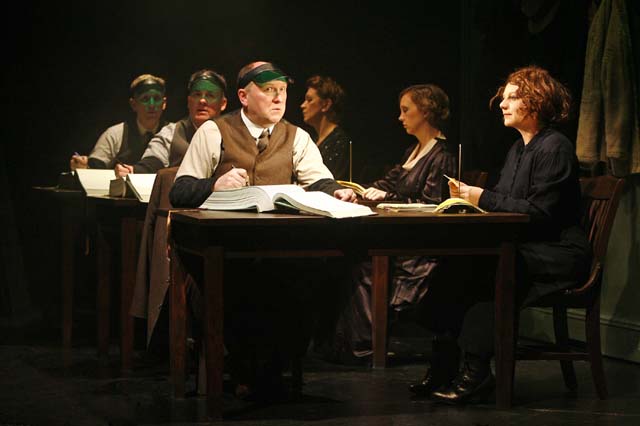 Elmer Rice's 1923 play The Adding Machine is an expressionist parable about a miserable bean counter named Mr. Zero who, after twenty five years at the same desk, is replaced by the titular technological marvel. For Rice, the roar of the twenties was the sound of capitalism crushing workers' souls; his play would go onto inspire Tennessee Williams and presage Death of a Salesman.

Now a musical adaptation of Rice's play, in from Chicago at the Minetta Lane, faithfully hews to Rice's dismal dramatization of what later generations would come to call simply The Machine. It's a story told in broad strokes: the desultory Mr. Zero, his termagant wife, their petit bourgeois friends, and Zero's flirtatious assistant are all one-dimensional sketches serving an overwrought fable. They're as uninteresting as they are unlikeable; even the hapless protagonist is such an incurious boor that it's impossible to empathize with him as his troubles add up.

The first couple scenes are promising, particularly a catchy ensemble tune in Zero's accounting office that revels in the quiet desperation of the average working stiff. ("I need a beer!") But Joshua Schmidt's tinny, synthesized score soon becomes grating, and many of the songs start to sound like parodies of hellish musical theater. Though at first glance Rice's maudlin play might seem like a timely choice for musical adaptation, the heavy-handed message of man vs. machine has been done to death by now, and this musical's maudlin iteration does little to revive it.

#Adding Machine
#lane
#minetta
#musical
#play
#review
#Schmidt
#show
#theater
#theatre
Do you know the scoop? Comment below or Send us a Tip