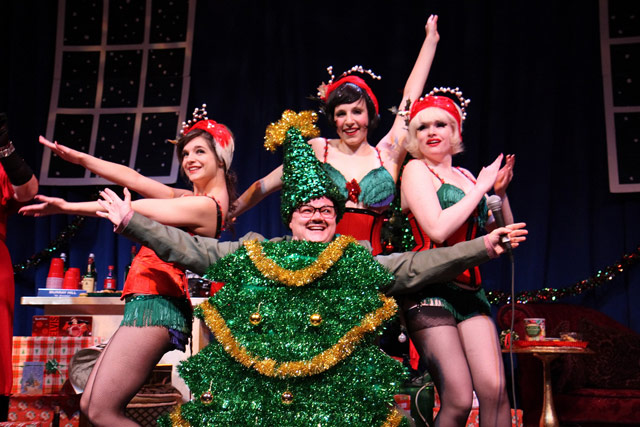 Tradition dictates that holiday variety shows be structured around a loose plotline of impending doom; Christmas is about to be canceled, Santa's under indictment, a rabid bear is mauling Elvis Costello. In A Murray Little Christmas, the rollicking and ribald burlesque comedy show now packing them in at The Zipper Factory, Xmas '08 is critically endangered by the multi-headed hydra of recession, Proposition 8, and, naturally, gentrification. Oh, also, there wasn't room in the production budget to install a working chimney in the "illegal gingerbread squatting apartment" that serves as the set, so there's no way for Santa to make his grand entrance.

But don't despair! This is the eighth year that downtown gender bending superstar Murray Hill—a wisecracking drag king in the body of a boozy, Borscht belt comedian—has presented his Christmas spectacular and, as he points out to thunderous applause, this is the last year the show will happen under the Bush administration. Of course, by this time next year there might not be anyone left who can afford to buy tickets, a possibility not lost on Mr. Hill: During the late show last night he roasted the higher-paying audience members up front, deciding that a trio of expensively-dressed men in the first row were homosexual and ruefully declaring, "The gays are the only motherfuckers with any money left! These people have health insurance!" 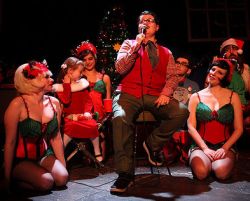 The show merrily rolls along on the strength of Murray's improvisatory and often hilarious patter, which is only enhanced by the full bar in the lobby. His profanity-laced shtick is interspersed with R-rated performances by a changing lineup of special guests, backed by a five piece band complete with vibraphone and trumpet. Last night featured an appearance by Dirty Martini, famous in the neo-burlesque scene for her prodigious breasts and mesmerizing tassels. Also on hand were bawdy singer/songwriter Bridget Everett, piano man Kenny Melman (Kiki & Herb), and, inevitably, a reindeer-shooting Sarah Palin. But perhaps the most memorable performance was the dirty, gravity-defying trapeze dance between Trixie Little & The Evil Hate Monkey, which was so weird as to defy description.

In fact, much of the show falls in the description-defying category; a bitter, diabetic snowmen is really only funny live and in person. It's enough to say that by the end, as the fake snow fell and the full cast gathered onstage to sing "Joy to the World (Obama has Won)," Murray's earlier assertion that "New York doesn't completely suck yet" was, for the moment, proven true.

A Murray Little Christmas ends next Saturday, December 20th, with two performances at the Zipper Factory at 8:30 p.m. and 10:30 p.m. For $10 off, enter code: trimyourtree