Opinionist: A Glance at New York 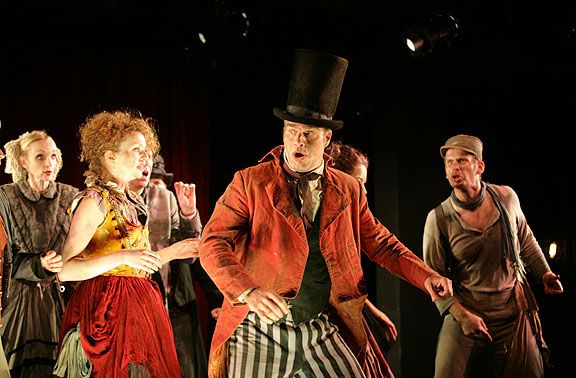 Until last weekend I had just a vague sense of what life in mid-19th century New York was like for the masses – filthy, brutal, corrupt, vulgar, smelly and desperate for dentistry. Now, thanks to a spellbinding 50-minute theatrical tour led by the Axis Company, I’ve got a vivid picture of what passed for living on the city’s streets in those days. The play is called A Glance at New York, and though you’ve probably never heard of it (neither had I) it was a smash vaudeville hit in 1848. Earlier this year the company delivered a high-octane revival to the Edinburgh Festival, making it an unlikely hit all over again.

Now they've brought it back home to their plush little subterranean theater in the West Village and it’s a must-see for anyone who enjoys wildly imaginative ensemble work. The story centers on a wide-eyed rube who, on his first visit to the city, gets duped into an increasingly embarrassing series of cons. Luckily for him, he falls in with a burly firefighter named Big Mose; together with his cousin the trio lead the audience on a bawdy, violent adventure through old New York’s bustling streets and seedy nightlife.

The city itself is the star here due to the inspired direction of Randy Sharp, who keeps her talented 11-member cast constantly swirling, muttering and humming about the stage, pausing at times in stunning tableaux to evoke the interior of a saloon, bordello or “ladies” bowling club. Combined with the superb, sumptuously ragged costumes by Lee Harper and Matthew Sharp, the company cracks open a window into a now distant New York era. Different characters tumble out of the crowd as needed to exchange words or punches with the central characters, then melt back into the mob, which never rests. (At times there’s so much happening at once that it becomes a challenge to focus on the central action, but ain’t that New York?) What makes A Glance at New York really exciting is the way Sharp builds her bridge to the past not with the typical naturalistic theater devices but with a sprawling surrealism, rambunctious as the city itself.

A Glance at New York continues on Friday and Saturday nights through November 17th. Tickets cost $20. Photo by DixieSheridan.

#Edinburgh Festival
#new york
#nightlife
#the city
#theater
#tickets
#west village
Do you know the scoop? Comment below or Send us a Tip