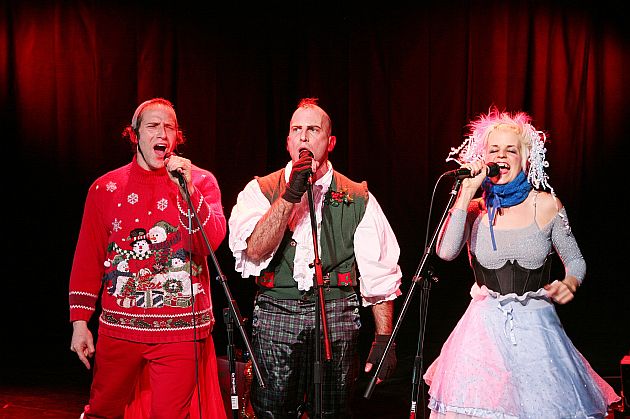 If you’re the type of parent who wears a Ramones T-shirt to a P.T.A. meeting, the idea of taking your kids to some sappy Christmas show is probably abhorrent; you wouldn’t be caught dead at Radio City’s spectacular and schlepping into Times Square to spend a fortune on “Grinch” is unthinkable. But if you’d still like to catch a holiday show with the whole family, there’s a limited-time-only alternative in the heart of the East Village, where the Chicago import 500 Clown Christmas is making merry mayhem.

The three clowns who comprise the ensemble aren’t the broad, cliché clowns you know from creepy needlepoints; these three belong to the edgy new resurgence in clowning that has exploded in recent years, one that places an emphasis on wildly imaginative characterization and more cerebral dialogue. The misleadingly named 500 Clown troupe – Molly Brennan, Adrian Danzig and Paul Kalina – are like a gang of freegan squatters who've taken over P.S. 122 to stage a sweaty, D.I.Y. answer to Cirque du Soleil. They're joined by a three-piece jazz band led by composer John Fournier, who gamely cooks up a swinging musical accompaniment for the hour-plus show. It’s essentially a collection of very funny original Christmas songs strung together by some slapstick comedy, off-kilter audience interaction and heated inter-clown bickering.

While I have a hunch the trio’s juicier ideas got tossed into their previous P.S. 122 show, 500 Clown Frankenstein, the team’s exuberance and brio prove ultimately irresistible. Who knew a microphone cord could so elegantly resemble unspooling entrails, or that the window ledges in P.S. 122’s second floor theater could become a dance floor for daring clowns to entertain a paying audience and passers-by on 9th Street? There may not be an overarching narrative at work here beyond the insanity inherent in the holidays, but there doesn’t need to be – the clowns’ spirit is infectious and the songs are fresh as ground nutmeg, with lyrics like, “life is a hooker and you never get laid” and choruses such as “Don’t be an asshole!” More conservative parents needn’t be alarmed; that’s as off-color as the language gets – and the dozen kids in the audience on opening night were guffawing as hard as the grownups.

#chicago
#christmas
#cirque du soleil
#city
#east village
#first ave
#radio
#radio city
#tickets
#Times Square
#While I
Do you know the scoop? Comment below or Send us a Tip