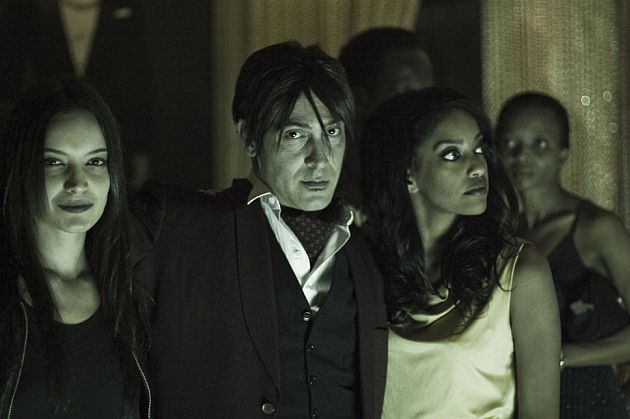 On Friday Gothamist visited the set of Rosencrantz & Guildenstern Are Undead, a bizarre little indie shooting in the East Village. The movie is a sequel of sorts to Tom Stoppard’s hilarious existential comedy Rosencrantz & Guildenstern Are Dead, but with “sexy vampires, the Holy Grail and Hamlet.” Jake Hoffman (son of Dustin), who appeared on some Arrested Development episodes, is a broke, frustrated ladies man who jumps at the chance to direct an off-Broadway play written by a pale, mysterious Romanian, played by John Ventimiglia, best known as Artie Bucco in the Sopranos. (Pictured above.) 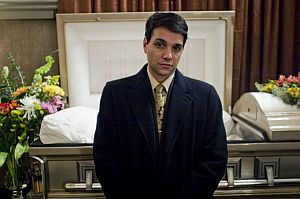 As the play within the film staggers toward opening night, a 2,000-year-old vampire conspiracy comes to light and consumes Jake’s ex-girlfriend, played by Devon Aoki. The flick’s tagline: Don’t Let Your Ex-Girlfriend Suck the Life Out of You.

Ralph Macchio (pictured) of Karate Kid fame is also in the cast; he told us the movie’s “like Buffy the Vampire Slayer meets Woody Allen’s Manhattan. I play the new boyfriend of Devon Aoki; my character is a wealthy Italian American who everyone thinks is in the mob.” Asked whether he still gets people telling him to “sweep the leg,” Macchio told us: “Yeah, they all want me to wax their cars, paint their fences and sand their decks. Sweep the leg, do the crane, nothing’s ever gonna keep me down. That’s all gonna be on the tombstone.”

Director Jordan Galland, who moonlights in the band Domino (myspace), says he was in a High School production of Rosencrantz and Guildenstern Are Dead when he decided to write a sequel to the play.

I was lucky enough to have dinner with Tom Stoppard once, through a friend who invited me. And I kind of told him about my idea and he was very into it. And then I met him again and he said, “You’re quite famous among all my friends, you know. I’ve told them all about your ‘Undead’ idea!” So then I realized I had to make the film.

Galland’s next project, on track to start filming in the spring, is an adaptation of Ryu Murakami’s surreal novel Coin Locker Babies and stars Val Kilmer, Liv Tyler, Vincent Gallo and Asia Argento. Galland co-wrote the screenplay with Michele Civetta and Sean Lennon, who is also writing the score for Rosencrantz & Guildenstern Are Undead, which Galland hopes to premiere in time for Halloween '08.