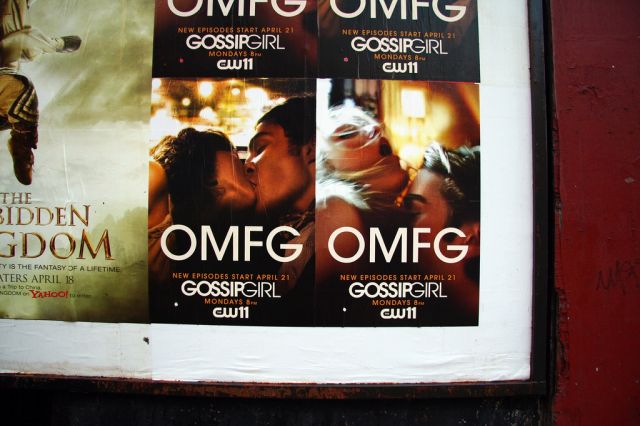 When last the teens of Gossip Girl were gossiped about, it was pre-writers strike and Serena van der Woodsen and Blair Waldorf were battling through the tough adolescent years: sex, car services and cocktails at The Plaza. Tonight the drama returns, with the first of five episodes that will close out season one.

Serena, known IRL as Blake Lively, said that the advertising campaign (pictured) is accurate, and that every episode will contain at least three "Oh-my-goodness-gracious!" moments. She tones down the raciness there, but the show is allegedly "introducing a new generation to the city Sex [and the City] glamorized a decade ago," and they've also got ads running on-air that are steaming up small screens nationwide.

The show gained a lot of viewers through online streaming of episodes at CWTV.com, but the higher-ups that delivered that service will now taketh away, only offering iTunes downloads at $1.99 a pop. An experiment to "see if we can grow the ratings by keeping these five episodes exclusive to our airwaves." Failing that, will all the on-air bad judgments, low morals and wrong-side-of-the-East River relationships (Nate and Vanessa? OMFG!) save the struggling CW network? NYMag, in a lengthy article on the show, seems to think so.