New York-born actress Olivia Wilde may garner some attention for her looks, but the 25-year-old also has quite a resume under her belt. You may know her as Thirteen on the television show House, you may have seen her around town while she was filming the Black Donnelleys, or you may just have spotted her browsing the Brooklyn Flea. Currently she's promoting the film Fix, which her husband (who is a real life prince, by the way) Tao Ruspoli directed. It opens at the Village East tomorrow, and earlier this week she told us a little bit about the film, her favorite books, and where to get the best taco in the city.

How did the idea for Fix come about? We were driving up the 405 in Tao's 59 Thunderbird, bouncing ideas back and forth for our first collaborative film project, when Tao started telling me the story of one day with his little brother, which became the skeleton for the story of Fix. I have always been fascinated by Tao's family, who are all interesting and eccentric, and I loved the idea of bringing this story to the screen. It's completely unique, and only Tao could tell it with the empathy and humor the film exudes.

The film just premiered in New York the other night — how was the reception, and how has it been so far overall? The reception of the film, all over the world in over 35 film festivals, has been extraordinary. Audiences have a great time watching the film, and often have a very emotional response to its raw honesty. Anyone with experience with addiction in their families seems to recognize the honest portrayal of the frustration, and often the futility, involved with trying to change someone you love. 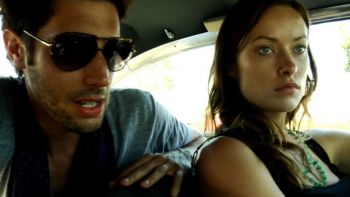 Have you worked with your husband before? What was the experience like? I have been a fan of Tao's documentary work, as well as his music video, and experimental film work for years, and I knew it was only a matter of time before we collaborated on a narrative feature. The most important element of the relationship between an actor and a director is trust, and because we have that build in to our relationship, I felt incredibly comfortable being directed by Tao. I was able to take risks, improvise, be completely un-selfconscious, without worrying about whether or not the director understood my intention. No one understands me better than Tao, and therefore I felt completely liberated under his direction. We also shared a common vision for the film, and so we were able to help each other achieve that by offering advice from our unique perspectives.

Do you have any good anecdotes from the set of Fix? When we were shooting Fix, we shot one scene in Watts, in the projects. This ended up being my favorite scene in the film because there were no actors in the scenes apart from our lead characters. The neighborhood embraced us completely and when we explained the intention of the scene, they jumped on board without missing a beat, began to improvise. We could never have found actors to play these guys. They added a truthful dynamic that has forced some audience members to wonder if the entire film is an actual documentary, which is absolutely priceless.

Of course, when you shoot in dangerous neighborhoods, and take risks in order to achieve something raw and real, you are opening yourself to the possibility of, shall we say, unforeseen consequences. While we were shooting the scene in Watts, our editor, Paul Forte, who was sitting in the back of our one production vehicle around the block, was held up at gunpoint and had his laptop stolen. Luckily he had backed up the footage onto a hard drive and the film was saved. Of course this experience was shocking, but the fact remains that we were welcomed with open arms into the neighborhood and allowed to shoot freely. This unfortunate event was an isolated one, and points to the importance of backing up your footage as you shoot!

Of all your television characters, is there one you are most attached to or similar to? I admire Thirteen, my character on House, because of her intelligence, wit, and strength. I like to think we have something in common, in that she is head strong and brazen, but I cannot imagine coping with everything on her plate. She is dying of Huntington's disease and has dedicated the rest of her life to saving other people's lives. Amazing woman.

You're a bit of a reader, what book would you recommend everyone read? I'm loving Sheryl Wudunn and Nicholas Kristoff's new book, "Half the Sky" about utilizing the developing world's female population as we work to solve all modern crises. It's a fascinating read, and very inspiring.

Are there any novels you'd like to see hit the big screen? Any characters you'd like to play? One of my favorite books is Mark Twain's "Personal Recollections of Joan of Arc," which tells the story of the great teenage warrior from the perspective of her best friend and companion. It was Twain's favorite of all his works, and although Joan has been brought to the big screen several times, I think this incarnation of her is by far the most interesting and would be a blast to play.

You were born here, but have you lived here for any stretch of time since you were younger? Would you move back? I would love to move back. I feel I'm at home here. I have a place here, and we come back as much as we can. I think my heart will always be in the City.

You were somewhat recently at the Brooklyn Flea, did you score anything good? I got a fantastic set of deco lamps and a great '60s vanity with a matching stool, all for under $300. I also ate the best taco of my life.

Please share your strangest "only in New York" story. On a recent evening out with friends after the Fix premiere, we somehow ended up traveling in not just one, but TWO white limos in one evening.

Another only-in-NY-moment: I was on a series in NY called the Black Donnellys, a short-lived but well-loved show about the Irish- American community in Hells Kitchen. Years after it was off the air, I was walking through that same neighborhood and noticed I was being followed by a cop. I quicken my pace. A few blocks later I became sincerely worried I had inadvertently broken the law, when he finally caught up with me and said " I love the Donnellys! Best show ever! Really felt like my own life." I was relieved.

Which New Yorker do you most admire? Martin Scorsese. I'm a huge fan of his work, and of course I hope to work with him someday. He maintains an excitement about the medium, and a great sense of experimentation, without seeming heavy handed.

What's your idea of a perfect day of recreation in New York? A coffee from Joe's on Waverly, the train to the Brooklyn Flea, a leisurely picnic in Central Park, dinner at Mary's Fish Camp on Charles, a great play, dancing to a live band somewhere fabulous, and a night cap at Little Branch on 7th and Leroy.

What's your current soundtrack? Edward Sharpe and the Magnetic Zeros. New, amazing band. Sort of a combination of Bowie and Arcade Fire.

Best cheap eat in the city. Tacos at the Brooklyn Flea.

Best venue to see music in the city. Bowery Ballroom.

#fix
#interview
#olivia wilde
#Tao Ruspoli
Do you know the scoop? Send us a Tip