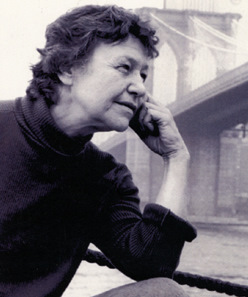 Olga Bloom, the violinst and violist who created Bargemusic, the classical floating concert hall docked at Fulton Ferry Landing in DUMBO, died yesterday in Manhattan. She was 92.

Bloom converted an old coffee barge into the performance space that it is today way back in 1977. "Water exerts a universal pull on humanity,'' she told the Times in 1990, also describing the atmosphere: "We also offer an unmistakably warm social occasion. Our audiences are small—we can hold 140, but I usually try to cut off at 130—so even though they don't know each other, they speak to each other readily during the intermissions. They are sharing values. And they are experiencing a noble performance of great music."

Bloom retired from Bargemusic in 2008, though performances continue there five nights a week. She died at Hearthstone Alzheimer Care, a nursing home in Manhattan, said Bargemusic’s president and director Mark Peskanov.