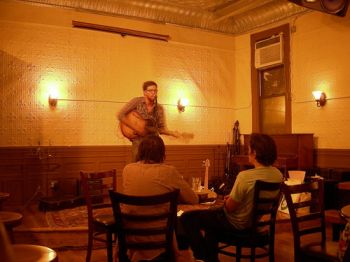 On the evening of April 3rd it was announced that Sound Fix, the record shop/cafe fixture on the corner of Bedford Avenue and N 11th Street in Williamsburg, was shut down. Since first mention the Dept. of Health has been blamed with locking the doors, but noise complaints are generally at the root of every establishment's demise.

What many thought was a temporary setback that would dim the cafe section for a few weeks at most, is turning out to be much more of a nightmare. Brownstoner investigated the major issues that are threatening a permanent shut-down of owner James Bradley's store -- who says the record shop is also being targeted.

According to Bradley, the Dept. of Health, the Dept. of Buildings, and the Police Dept. have all issued violations on the business, many of them requiring court appearances. "It's been really overwhelming," says Bradley. The record store owner believes the violations are rooted in complaints from a couple of neighbors who live in an adjacent building, one of whom, Teresa Polonski, works for Assemblyman Joseph Lentol.

Neighbors and venues don't mix well in Williamsburg (or anywhere else), as shown just last year when Northsix was transforming into the Music Hall of Williamsburg.

The shutdown happened after three DoH violations were handed down to the establishment for serving food without a license -- a license they refuse to grant Bradley because of fines owed by the previous tenant. Sound Fix's lawyer says he "was advised by DOH that this was actually a Mayor's task force." An official even told the place that they were under pressure "from Albany to put us through the ringer."

The next obstacle? Sound Fix was notified they are in violation of zoning laws, with both businesses in an area zoned for residential use -- however Bradley has a Certificate of No Objection which keeps things legal. Will this "campaign of harrassment" stand in the way of them celebrating Record Store Day tomorrow (their musical guest is Regina Spektor) -- they tell us "We are trying to get inspectors over today so we can be open for tomorrow." Come support them, and be sure to make lots of noise for Ms. Polonski.