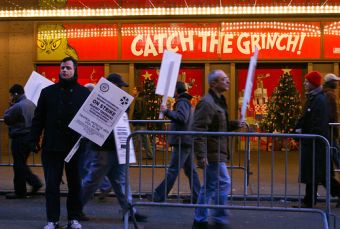 Having already seen one of this season’s most anticipated Broadway plays, Tom Stoppard’s Rock ‘n’ Roll, we haven’t been yet been personally disappointed by the Local One stagehands’ strike. While we sympathize with the union and the theatrical community that’s now out of work, we’re not exactly losing sleep over tourist tweens missing out on Legally Blonde for a few days. Now, however, we’re really starting to sweat it: though talks will resume this weekend, the shutdown is already threatening some productions we’ve been very excited about, namely August: Osage County, Harold Pinter’s savage black comedy The Homecoming, and The Farnsworth Invention, which was set to open tonight.

Some see the potential here for one of those prolonged, bloodletting standoffs, so whether you’re just tuning in or have already been following along, we highly recommend this cogent explanation in today's Times that breaks down exactly what the union and producers are fighting about. (And The Playgoer continues the analysis with an insightful pro-union argument.)

For those who had planned a family-oriented outing around a Broadway show this weekend, don't despair: We’ve compiled an index of some terrific off-Broadway theater alternatives. Some of these shows are suitable for kids of all ages, others are a better fit for the ten-and-over range, but all will cost less than what you had budgeted for Broadway. Read on. (Photo from JWilly's Flickr.)

Jump is a high-energy kung-fu spectacle full of acrobatic flipping, punching and kicking; it promises the “rare opportunity to see the kind of action you’d see in Jackie Chan and Matrix movies, but with no second-takes, wires or special effects.” [Union Square Theatre,100 East 17th Street]

If you need to stay near Times Square, step right up to The New Victory Theater for Tapeire, a whirlwind mix of “Celtic tap” dancing, Irish fiddling and live video that projects close-ups of the hoofers’ happy feet, which supposedly knock out 38 taps per second! [209 West 42nd Street]

If the weather stays mild Accomplice: The Village is a one-of-a-kind, interactive alternative. Described as an adventure in organized crime, the hit show is part mystery/scavenger hunt and part walking tour through the West Village, run by a gang of talented improv actors. [After buying tickets, you’ll be contacted the night before the “show” and told where to meet your contact.]

For the younger tots age 4 and up, Manhattan Children’s Theater is celebrating the 60th anniversary of the classic Goodnight Moon with a staged musical adaptation of the book. The company warns parents that “bedtime storytelling will never be the same! And yes, in this adaptation, a cow REALLY DOES try to jump over the moon!” [52 White Street, Tribeca]

Those with more highbrow progeny can take a little adventure to the visually breathtaking neighborhood of DUMBO Brooklyn, just one stop in from Manhattan on the F or A trains. Make your way to the vintage carousel in a building on Water Street, where the esteemed Czechoslovak-American Marionette Theater is presenting their version of Hamlet using elegantly hand-carved marionettes. [56 Water Street, Brooklyn]

Cirque du Soleil is in town with an eye-popping, kid-friendly show called Wintuk, “an enchanting winter tale about a young boy, Jamie, and his quest to find snow. The boy lives in a city where the arrival of winter has brought long shadows and intense cold – but no snow!” Jamie’s snow-making mission gets him mixed up with “a cast of high-energy urban street characters, including acrobats, dancers and giant marionettes.” [WaMu Theater at Madison Square Garden, Seventh Avenue between 31st and 33rd Streets]

#arts
#Arts and Events
#broadway
#Broadway strike
#broadwaystrike
#comedy
#flickr
#harold pinter
#haroldpinter
#kids
#legally blonde
#Local One
#localone
#offbroadway
#photos
#rock
#Stagehands strike
#strike
#The Farnsworth Invention
#The Homecoming
#The Playgoer
#theater
#Tom Stoppard
Do you know the scoop? Comment below or Send us a Tip
A new Gothamist is coming! We’ve moved comments over to our beta site. Click here to join the conversation and get a preview of our new website.