By yesterday evening the Paper of Record published not one, but two takedowns of women — somewhat unsurprisingly, both centered around weight and penned by the fairer sex. The stage for the scrutiny was the Golden Globes red carpet, which many an actress strolled down on Sunday night.

The first piece, written by Andy Port (yes, a woman), declares that Jennifer Aniston, Courtney Cox and workout queen Kate Hudson have all "put on a little weight." Though she says they are "sporting sexier curves" she then goes on to say it's concentrated in their upper arms.

Then, Cathy Horyn decides to take down the gorgeous Christina Hendricks — the Mad Men actress known for her sexy curves... which are decidedly not concentrated in her upper arms. In her piece she writes, "Not pretty Christina Hendricks in Christian Siriano’s exploding ruffle dress. (As one stylist said, 'You don’t put a big girl in a big dress.')" Whether you agree or disagree (you disagree, right?), it should be noted that the photo running with Horyn's piece was most definitely distorted, possibly to (falsely) illustrate her "point." Check out the side-by-sides above. We've contacted Horyn for comment and we'll update when we hear back.

The NY Times has now replaced the image, saying: "The photo was slightly distorted inadvertently due to an error during routine processing." Take that for what it's worth. This is a screenshot taken prior to the replacement. 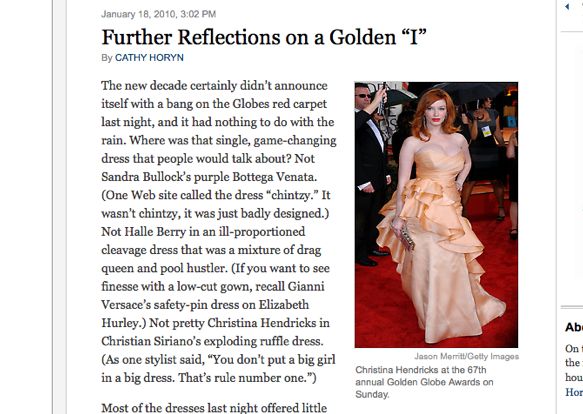