Over the next few months, the New York Public Library will be bringing books to residents of the Bronx, Staten Island, and Manhattan via a new fleet of sleek, cherry red-colored vehicles.

These new NYPL bookmobiles are intended to help communities that don't currently have ready access to libraries, or whose local libraries aren't totally operational. The Bronx's resident Grand Concourse Library, for instance, is currently closed for the next year due to ongoing renovations—until recently, the borough had no bookstores, following the 2016 closure of Barnes & Noble.

The NYPL has offered New Yorkers books through its mobile libraries, at times called bookwagons, for over a century. Yet the new bookmobiles mark the first time the NYPL has had a mobile library out on the streets since the early 1980s, according to a library spokesperson. 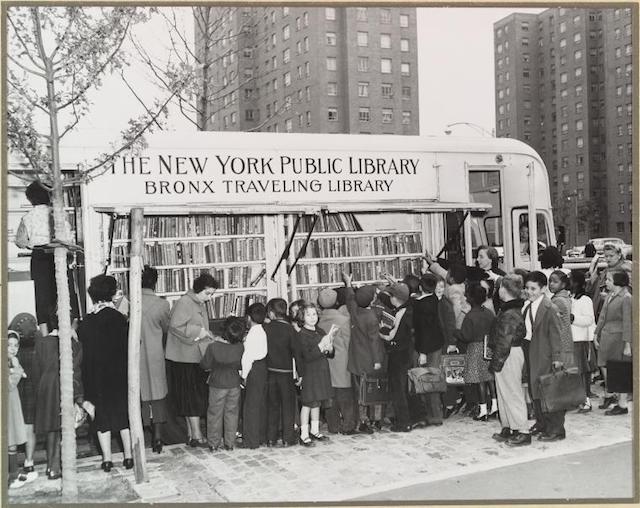 A Bronx bookmobile, pictured in the 1950s. (Courtesy of NYPL)

The new roving libraries, which can hold up hundreds of books at a time, will offer a wide selection for kids, young adults, and adults. Readers can also place books on hold through the bookmobiles—so if they want a specific book, they can order it and pick it up at one of the vehicles. The bookmobiles are expected to start making their way through the Bronx this June, and through the other two boroughs sometime in the fall, after undergoing testing this month. Check the NYPL's Twitter feed and website to find out where they'll be parked.

#bookmobiles
#books
#new york public library
#nypl
Do you know the scoop? Comment below or Send us a Tip