[UPDATE BELOW] Banksy may be the hero Gotham deserves, but he's not the one it needs right now, or something, according to the NYPD, which is making his arrest a top priority. The department's legendary Vandal Squad, which aggressively pursues graffiti artists, is reportedly on the hunt for Banksy. "They want to question him in connection with the vandalism,” one law-enforcement source tells the Post. "If they catch him, he will be charged with vandalism." 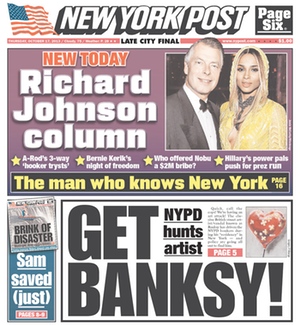 At a press conference yesterday, Bloomberg signaled that Banksy is, and should be, in the NYPD's crosshairs. "Graffiti does ruin people's property and it's a sign of decay and loss of control," the mayor said. "Art is art, and nobody’s a bigger supporter of the arts than I am. I just think there are some places for art and there are some places [not for] art. And you running up to somebody’s property or public property and defacing it is not my definition of art. Or it may be art, but it should not be permitted. And I think that’s exactly what the law says."

According to the Post, the mayor’s office says the city will remove any Banksy work on public property, such as the 9/11 installation we discovered at the Brooklyn Promenade.

Yesterday a Red Hook warehouse was revealed to be a staging ground for Banksy and his crew—investigators could conceivably subpoena the owner for documents about who rented space there. Or they could pull over one of the drivers of Banksy's trucks and transfer him to a CIA black site until Banksy turns himself in. Last night we sent an intern to attach himself to the bottom of the Banksy waterfall truck, Cape Fear-style, and we'll let you know what he learned if/when he resurfaces.

Update 3:32 p.m.:The Daily News' source tells a different story, explaining to the tabloid that the Vandal Squad only investigates if "someone complained about it," and "I haven’t heard of anyone complaining." Except, of course, for the mayor of the city. But who listens to him?

#banksy
#nypd
#vandal squad
Do you know the scoop? Comment below or Send us a Tip