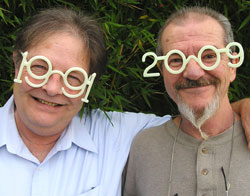 Just a couple of wild and crazy guys

Richard Sclafani, co-inventor of the numeral glasses seen everywhere on New Year's Eve, just contacted us to let us know he has put up a whole slew of vintage frames up for sale on eBay. Glow-in-the-Dark! Rare! Mint Condition! How much will this nostalgia-buy set you back? The auction is 2 days in with a starting bid of $500.

The duo bowed out of the glasses game when the design became challenging for 2010, but others picked up the torch (Sclafani tells us "We're happy that the tradition has continued"). They're old school lot up on the auction block covers the good ol' days of 1991 to 2000, but the original inventors note in their listing, "We continued making the glasses through the year 2009, and those additional 9 years will be made available in future auctions. So it will be possible to collect all 19 years!"

We asked Sclafani (pictured here with co-inventor Peter Cicero) what he thought of the 2011 glasses. He told us, "Some of the new versions are pretty bad, but I saw a couple that are decent. They'll certainly do, but they'll never have quite the same natural, aesthetically pleasing look of the originals. Also, the new ones will always have the stigma of being knock-offs. Although the act of ripping off other people's patented ideas has become commonplace and even accepted these days, that doesn't make it right. If I just got a nickel for every knock-off that's been sold, which would be the right thing to do, then the 20 years I spent promoting them would have been worth it financially. I'm hoping that collectors of Pop Culture will see the value of the Originals and help me out in my old age!"