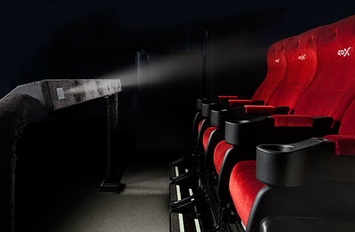 New York City's first 4DX theater is opening this month, according to a press release that triumphantly appeared in our inbox today—but what is 4DX, even?

In short, 4DX is "an immersive theater technology featuring moving seats and environmental effects." The experience will bring wind, fog, rain, lightning, vibration, TICKLING, snow and scents to your seats, giving viewers a visual, aural, olfactory and tactile film-viewing experience, "perfectly syncing cutting-edge technology to the action onscreen." It's like an action park ride in the movie theater, but with "ticklers." Just the kind of experience to make movie-going in New York City even more hellish.

While this works best with blockbusters, we hope that one day the technology advances to add value to every film. Who doesn't need a personal space machine to push others away during Todd Solondz's latest surreal cinematic foray?

But for now, it's the big, showy something goes boom blockbusters, and the first flick you'll be able to experience this in is Batman V. Superman, opening on March 25th at Regal Union Square Stadium 14. This will be followed by a 4DX theater opening at the Regal E-Walk 13 on April 28th. These are the 3rd and 4th auditoriums in the whole United States to host 4DX screens.

Now can we work on movie theater seats that repel bedbugs?