NYC's Cliffside 'Pumpkin House' Is Back On Market With New Photos, Lower Price Last summer, the home at 16 Chittenden Avenue in Manhattan hit the market at $5.25 million, a fair price for what's been dubbed "The Pumpkin House," an incredible property hanging over a cliff.

Curbed reports that the property has been on and off the market since, and last week was re-listed (with some wonderful new photos) for a discounted price of $4.25 million. You know, if that makes a difference for you. The new listing notes that the home features six-bedrooms, three-baths, and "a separate one-bedroom apartment."

The property extends out over a cliff that's north of the George Washington Bridge, and on the other side of the Hudson River it looks a bit like a jack-o-lantern face when the lights are on at night. It also glows orange when the setting sun hits its surface... though previous owner William Spink didn't think that made it look like a pumpkin, declaring to the NY Times: “I guess if you’ve had enough Quaaludes, it might look like a pumpkin.”

Here's a closer look inside of the 3-story home.

The home was built around 1925, constructed "on a steel foundation sunk into a steep cliff at West 186th Street... It was commissioned by Cleveland Walcutt, an engineer, on land purchased from the estate of James Gordon Bennett, the publisher of the New York Herald." It's only had a handful of owners in its lifetime. If you're the next one, please invite us to dinner. 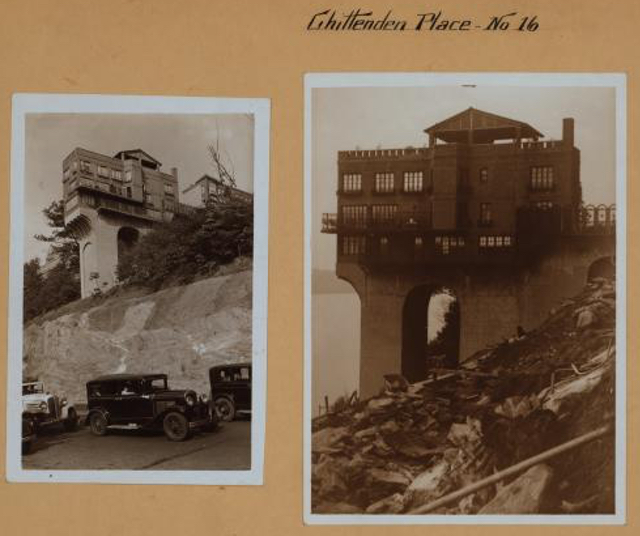 A look at the home when it was being constructed. (Photos courtesy of the NYPL)

#pumpkin house
#real estate
Do you know the scoop? Comment below or Send us a Tip