NYCFC Unveils Their Jersey, Which Looks A Lot Like Manchester City's

It's just before 11a.m. on a Thursday, and Terminal 5 is hosting an odd sort of party. A group of school children from PS 111 kick soccer balls. A separate group of 20-somethings in scarves and sky blue garb check their phones and look eager for what's to come. A small pocket of reporters wander between suited executives and Etihad Airways flight attendants. An MC on stage warms up the crowd, imploring them to chant "WELCOME TO THE CLUB!" in a rhythm that doesn't quite hit the cadence of any familiar sports chants.

The assembled were gathered to witness two announcements from New York City's latest MLS franchise, NYCFC: their first jersey, and the club's principal sponsor. But the announcements failed to create a clear identity for the club: both the sponsor and the "kit" are practically the same as NYCFC's parent club, Manchester City.

The sponsor, unsurprisingly, is Etihad Airways. James Hogan, the company's CEO, spoke passionately about their commitment to sport and their affinity to New York, as it was their original US destination. But given that Etihad also sponsors Manchester City and Melbourne City, both part of the City Football Group portfolio, it won't help perceptions that NYCFC doesn't have a distinct identity.

The jersey itself deepens that impression. The design is a simple sky blue kit, with the Etihad sponsorship on the chest, a club crest over the heart, and the usual Adidas stripes on the shoulders. There are some small additional details—an "Inaugural Season" design towards the bottom in the style of subway tile art, and a tape inside the collar with the club name in trendy Helvetica—but you'd be hard pressed to differentiate between MCFC and NYCFC jerseys on a shopping rack. 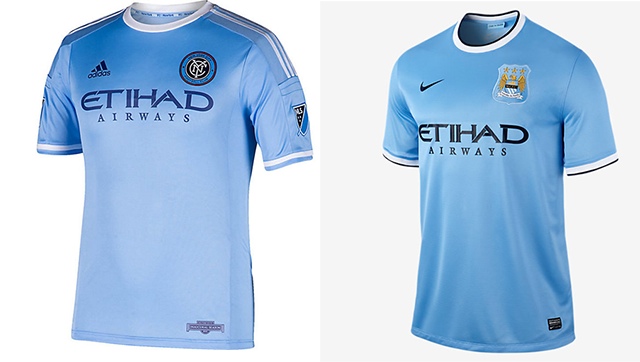 Reaction was swift and unkind, with City fans on social media feeling everything from disappointment to betrayal. One wrote on Reddit:

It's disappointing. Somehow I deluded myself into believing that this would be a mostly independent MLS club with its own identity. Basically I thought the league realized it had a fundamental problem with RBNY (and Chivas) and that wouldn't happen again. Man City was the owner, same colors, but overall independent look and identity. Nope. Complete Manchester City clone. It's infuriating because I want to like this team, and I don't like Manchester City. [...] The City deserves better. It deserves a real club with a unique identity, not another US-based vanity project. They could not have gotten this more wrong if they tried.

Love it or hate it, the jerseys are available for pre-order; they'll ship December 3rd.

Some additional news from club executives from interviews following the announcement: