There's been a lot of advances in recent years for short men—unique clothing lines, experimental procedures, more and more pint-sized stars—but it's still pretty hard out there for short men, especially if you live in NYC. According to a new survey, NYC women don't have any time for the vertically challenged. 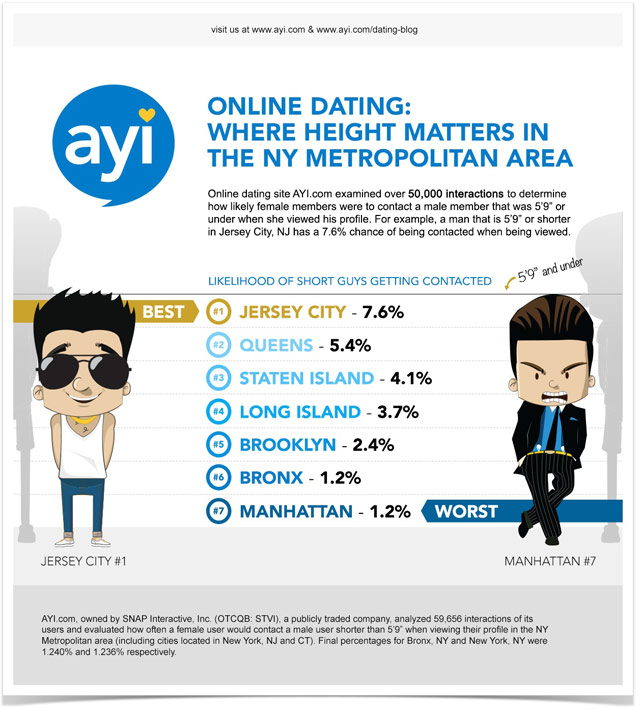 AYI.com analyzed over 50,000 interactions in the NY metropolitan area to determine how likely female online daters were to contact a men that was 5’9″ or under when she viewed his profile. And the results were rather depressing: Manhattan women were the choosiest (only 1.2% would contact), followed by The Bronx (1.2%), Brooklyn (2.4%) and Long Island (3.7%).

“Cross-culturally, women show a preference for taller mates,” Dr. Jill Shapiro, a biological anthropologist at Columbia University, explained to the Post. “Most people think it’s related to sexual selection. Taller men are perceived to be healthier, be better providers. By being tall, you are signaling that you have good genes.” And a higher-paying job.

But there is hope for short men, and it resides a stone's throw away in the mythical land of Jersey City, where women aren't quite as discerning when it comes to height. “It’s going against the normal pattern for most humans,” Shapiro said of Jersey City women. Well, we are talking about a place where people occasionally eat their own fingers and rents are not ridiculously high, so yeah, things are different over there.

#dating
#height
#heightism
#jersey city
#love
#short men
Do you know the scoop? Comment below or Send us a Tip