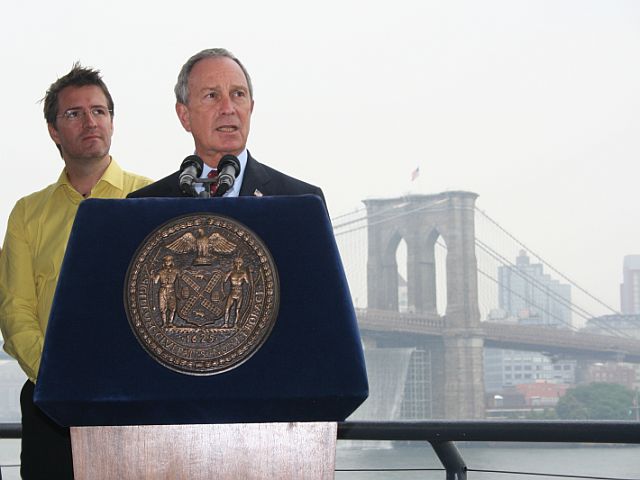 At a press conference in June, Mayor Bloomberg, seen here with artist Olafur Eliasson, predicted the exhibition would result in $55 million in additional revenue for the city.

As crews begin dismantling Olafur Eliasson's four arboricidal waterfall scaffolds, the mayor's office has released a report asserting that the economic impact of the installation was better than expected. When the waterfalls were turned on back in June, Bloomberg predicted the city would see some $55 million in revenue from the exhibition. A study commissioned by the city’s Economic Development Corporation says that the NYC Waterfalls generated an estimated $69 million for the city. According to City Room, that figure breaks down like so:

At a press conference today, Bloomberg told reporters, "We always knew the waterfalls [exhibition] was going to reinvigorate our city's waterfront—but its actual impact has exceeded our expectations. People didn't buy tickets or pass through a turnstile to experience the waterfalls, but this exhibition brought people to areas of the city they might not otherwise ever have visited." A company called Audience Research & Analysis conducted visitor counts and surveys throughout the summer and determined that 1.4 million people visited. 79,200 of them were visitors to the city who, were it not for the waterfalls, would not have visited or extended their visit.

Of course, there are skeptics. Carol O’Cleireacain, a former New York City budget director and expert on urban economics, tells the Times, "As in many economic models, it all depends on the assumptions you make. If you make generous assumptions, you’ll come up with generous results."