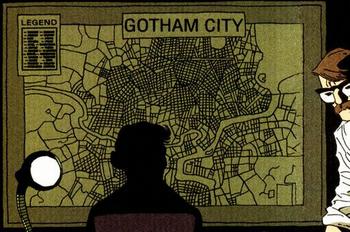 Even though New York City has around 98 monikers, did you know that there is no official city nickname?

The Village Voice reports that one Queens Councilman, Hiram Monserrate, is ready for that to change. Monserrate wants us to officially stake claim on the "Gotham City" title, and is pushing the City Council to designate it as our chief nickname (preferably before The Dark Knight is released this summer). He says, “I see that as a marketing tool, ‘Come visit the real Gotham City,’ taking advantage of this movie which will be one of those gate-breaking, record-selling movies like it always is.”

While the Gotham we know from Batman is corrupt and gritty, Monserrate says, “When we talk about Gotham we talk about tremendous, tremendous nightlife, restaurants, lounges, clubs and cafes, frappuccinos...". Pretty sure Batman was never spotted sipping a Starbucks frappuccino (though perhaps Bruce Wayne could be imagined in such a scenario).

Barry Popik points out that Harlem's 1934 "Big Apple" night club's iconic sign was never landmarked, and instead destroyed in 2006 in order to put up a Popeye's fast food restaurant. Yet Monserrate says our Gotham City is all about "the rich architecture," something that Batman's Gotham was inspired by; hopefully there will be some left by the time we get the official title.