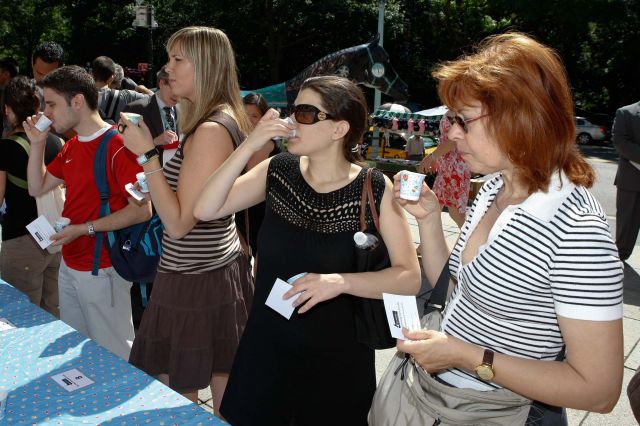 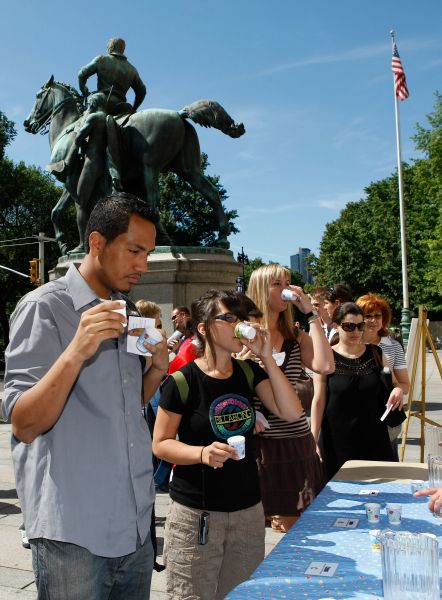 This morning the American Museum of Natural History hosted a Tap Water Taste-off on their steps. New York City was one of five area communities competing for the title of tastiest tap water in the state during the event. Who came out on top at the 2008 regional taste-off contest? Sadly, we were robbed, with Bethpage in Nassau County grabbing the blue ribbon. The good news is NYC came in 2nd! With that kind of placement, the city will represent during the big event at the New York State Fair on August 26th.

The event was not scientific, and relied on passerby to blindly taste test each cup -- though it was pointed out that tap water is serious business, and the competition stresses the importance of clean, safe, and healthy drinking water. Earlier this year the Riverkeeper and Clean Drinking Water Coalition gave us A grades for our tap, or more accurately, "for reducing fecal coliform from waterfowl, managing stormwater runoff and waterborne disease risk assessment." If you're thirsty for more knowledge on NYC's tap water, check out AMNH's Water exhibit, which includes the New York City Water Story.

Other areas who were sent home shamed this morning after not placing in the Top 2: New Windsor (Orange County), Dix Hills Water District (Suffolk County) and Croton-on-Hudson (Westchester County). See you at the New York State Fair, Bethpage.

#amnh
#competition
#museum
#new york state fair
#taste test
#water
Do you know the scoop? Comment below or Send us a Tip