We recently spoke to a few paranormal investigators to ask about haunted houses, spooky moments and, of course, Ghostbusters. Read their responses below—and click through to some real locations they think are pretty creepy!

Jason Stroming
How do you detect Paranormal activity? What equipment do you use?

Jason Stroming, of the NY Paranormal Society: We mainly uses things like EMF detectors, which detect changes in the electro-magnetic field, still and video cameras, and audio recorders.

We try to keep things simple, and we don't use a lot of the newer "ghost hunting" equipment like the Ovilus or MEL meter, as these things were basically invented to give the user results. It's hard to use one of those devices and not get a "response," so we avoid them.

We use equipment to rule out activity, not to prove it.

The best way to detect activity is with sensitive people and good video and audio to follow them around.

Do you rely on your intuition or a “sixth sense”?

Dom: Absolutely, without it we would just be a bunch of people walking around waving gadgets at the air.

We don't rely on intuition only, but it can be a good tool.

We've been to some locations where we've inexplicably all had very bad feelings as soon as we entered the location. Sometimes it's so strong you can feel it.

Jason: Sometimes, our equipment will give results at the same time we “feel” or see or hear something, and that’s always interesting. It doesn’t mean something paranormal is necessarily happening, but it’s interesting when we get an eerie feeling and then notice that the EMF meter is spiking.

: Intuition can be a broad area for many, as some will define it as having psychic abilities, while others see it as “the little voice in your head that tells you to simply Get Out!” heh. I personally like to follow my gut feeling, and for those who wish to call it intuition so be it, but you’ll never find me admitting to having a “little voice in my head” for fear of being locked up, haha!

Laura: Well, kind of - it's not like the Ouija board section of Toys"R"Us is haunted. The board itself is harmless, but it's how you use it that can be dangerous. There are a lot of theories out there that if you allow yourself to open up your mind to whatever paranormal beings may be around, you are in effect slapping a welcome mat down in front of your door and inviting anything in.

Jason: I know plenty of people who have had weird experiences with Ouija boards, myself included, but I never discount the possibility of coincidence or flat-out trickery.

Dom: It's a fun Parker Brothers game, other than that not much use to communicate with the other side.

: I look at it this way, (and pardon me if I’m incorrect on the individual) but I believe it was J Randi who said it best. “If Ouija boards actually worked, Parker Brothers would be major stockholders in the spirit world!”

What’s the craziest/coolest paranormal claim you’ve heard? Are there any places/things that people think are paranormal but aren’t?

Jason: I think the craziest paranormal claims I've heard are of people being abducted by aliens in UFOs in New York City. I don't put much stock into alien abduction stories to begin with, but to believe that people are being abducted from large apartment buildings in the middle of Manhattan, that's stretching things a bit too much.

Our society has such a weird way of dealing with death, and I think cemeteries, for most people, are inherently spooky, and therefore must be haunted. Most cemeteries we've been to have been the quietest places for us, paranormally speaking.

Dom: A client once claimed that dried urine on a mirror was ectoplasm, when we tested it and told her it was urine she didn't believe us and called in another team. 98% of places we go to turn out to be an electrical problem, temperature problems or a psychological problem. The thing most people think is paranormal but isn't is Old Hag Syndrome (also known as Sleep Paralysis), the feeling that something is holding you down while you lay helpless in bed.

Describe any favorite investigations or findings.

Laura: A couple of times other investigators have caught EVPs saying my name while reviewing evidence after a case. That’s always nice to hear…

Arthur: I’d have to say that the investigation of The Governors House, at the Snug Harbor Cultural Center, on Staten Island, NY has to be one of the most memorable ones since it was one of the first investigations in a long time where it was fully sanctioned and we had full control over the entire house. Each and every investigator saw shadows of humanoid figures which were able to seemingly blot out the LED’s on our Infrared cameras, you would see them move from one area to the next and at times they seemed to peek into the rooms where we were, which felt less than comforting.

Does anything scare you?

Laura: One time a couple of years ago an SUV came dangerously close to plowing me down (and I had the walk light!)…It sounds kind of stupid but I get pretty anxious anytime I cross the street now—which is, of course, ALL THE TIME.

Jason: Footsteps coming from upstairs when you are the only person in the building can be startling, but I'm the type of person who runs after those kinds of things, because I want to see what's going on. 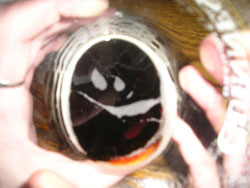 : I think the only thing that scares me are angry people. Ghosts don't hurt people, people hurt people!

Arthur: There was a paranormal group which I had read about a while back who had investigated a residence. It so happens that the residence…had a massive infestation of bed bugs! A similar story was posted on our EPIC Facebook page where a young investigator had previously passed after having investigated a location. The later findings were that the location that she was investigating was filled with air born fecal particles from rodents. So when people ask me, “is it dangerous investigating the paranormal?” I answer with an “absolutely!”

What do you think of Ghostbusters? Are there any movies that depict the paranormal or supernatural well?

Laura: There are no movies that depict the paranormal well... because the paranormal is, for the most part, pretty boring. One of my current favorite paranormal movies is Grave Encounters. I think it’s hilarious how it portrays reality TV. 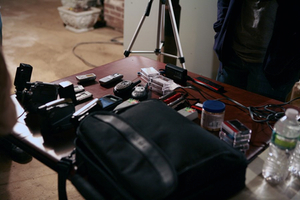 : Ghostbusters is a comedy classic, and one of my favorite movies. But it's clearly not true to life…You’re lucky if you hear some footsteps or a muffled voice or a door creaking. But I would say certain elements from Paranormal Activity are close enough in showing what the supernatural can be like, before it goes all over-the-top.

Dom: I love Ghostbusters, You can't take this business too serious and I love that the movie could poke fun at it. I think the movie that depicted the paranormal and supernatural well was What Dreams May Come. It was one of the few movies that I felt could be possible and showed the afterlife is a compassionate way.

Arthur: In my opinion Ghostbusters was an awesome film. It was released in 1984, and strangely enough it was approximately around the same time that the last of the American academic universities and institutions ceased to fund their Parapsychology Departments, and just like in the film, send them packing.

Unfortunately there hasn’t been a film made to date which accurately depicts the paranormal and supernatural. The misconception that we all see every week on TV is chopped up into 22 to 26 minutes, which in reality if done properly one of those cases would take a month or more, and that is the reality of being a paranormal investigator!

#ghostbusters
#halloween
#paranormal
#paranormal investigator
#supernatural
#original
Do you know the scoop? Send us a Tip