NYC Only Has The 2nd Best Parks In The U.S.

Recently there was a HEATED COMPETITION (fine, a survey) between the parks in the nation’s 50 largest cities. The non-profit Trust for Public Land looked at a number of factors, including park access, size, services (like free peep shows), and public investment. Each park was then rated on a scale of 1 park bench to 5 park benches (that latter being the perfect score). New York City scored 4.5 benches, landing it in 2nd place.

First place went to Minnepolis, which is like barely a city in comparison to ours. Their Governor Mark Dayton says their parks are the best because they're "safe," but whatever, Mayor Bloomberg gave us a cute nickname in his reaction: "The latest ParkScore rankings are further evidence that New York City is the 'Queen of Green.' Not only do we have a huge open space network, but we have one of the best park systems overall. Our sustained investment in building great parks and maintaining them well pays off for City residents and visitors alike, making NYC a great place to live, work, and visit. Look out, Minneapolis—we may be Number 2, but not for long." 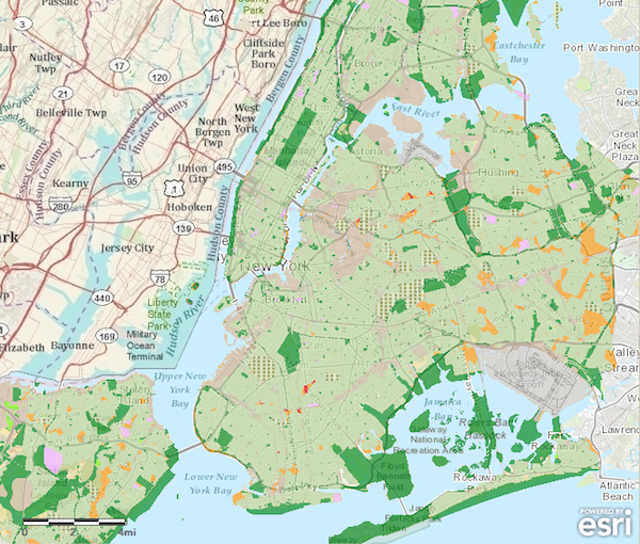 All of the maps can be seen here

Our one big flaw? The NY Times notes that points were taken away for our median park size, which is only around one acre in comparison to the national median of five acres. Former parks commissioner Adrian Benepe pointed out, “While New York has some really huge parks, a half-acre park cancels out a 1,000-acre park when you do medians. Sometimes, history is destiny with how cities develop.” (Benepe, by the way, is now with the Trust for Public Land, but "the survey was data-driven, so [he] did not recuse himself from the judging.")

In the end, Minneapolis unseated San Francisco as the nation's top park system, while Fresno, CA had another last place finish.