The 9th annual Go Topless Day—an event traditionally held on the Sunday closest to Women's Equality Day, which was Friday, August 26th—was observed yesterday nationwide. In NYC, there was a parade on West 58th Street featuring a small number of topless women, with some shirtless men alongside them for solidarity. However, much of the crowd was made up of male onlookers—one of whom punched one of the topless women in the neck.

Go Topless Day is, the Daily News reports, "organized by members of the Raelian Movement, known for its belief that aliens founded the world’s major religions." Spokeswoman Kasyo Perrier says in a press release, "Spiritual leader, ​Maitreya Rael, who inspired the creation of​ GoTopless and founded the Raelian Movement, says there must be absolute equality between men and women to ensure the preservation of society. Centuries of gender inequality and exclusive male rule created major planetary imbalances that could prove fatal to society."

A 1992 appeals court ruling made it legal for women to be topless in public in New York State. 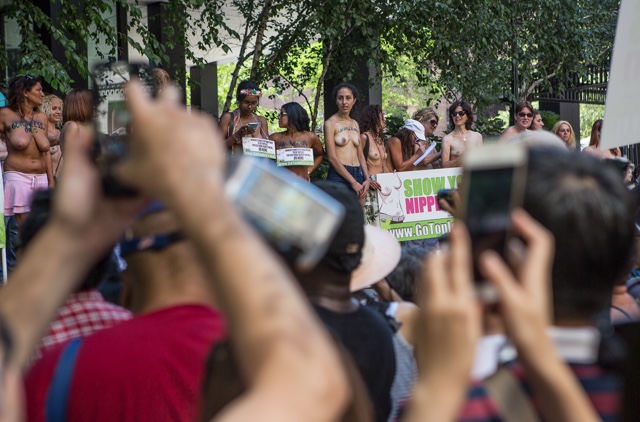 Sunday's event drew a crowd, but it was mostly men with cameras—"There were just men with cameras and iPhones all chasing after the topless ladies like they had never seen a woman's breasts in their entire lives," our photographer Gretchen Robinette said. "The camera crowd grew thicker with every passing block, as more and more men jumped in on the parade, seeing their unexpected opportunity to video real breasts up close."

She added, "I watched a mother and her 3 children, not involved with the parade, nearly get trampled just trying to cross the street because the men were flocking from all over to shoot breasts. One of the kids was knocked down and crying, trying to stand up, but rather than help him up, the breast obsessed camera [men] just walked over him keeping their gaze locked on any topless women they could."

A video shows one of the parade marchers and a man with camera equipment getting into a fight, just before the 2 minute mark:

The Post explains, "a leering bystander allegedly stalked a bare-chested woman he’d been harassing through the sea of nipples — and punched her in the throat."

When the man, clad in a checkered red shirt, tailed and eventually confronted her, the woman spit in his face again, according to bystanders. He then clocked the exposed co-ed in the throat and shoved her before police closed in on the duo.

Both the woman and man were taken into custody; the video's uploader says the woman was given a summons. A NYPD spokesperson did not have any details of the incident.

#go topless
#go topless day
#topless rights
Do you know the scoop? Comment below or Send us a Tip