Abrams turned the Lower East Side into a war zone earlier this year, but he's been hush-hush about any details surrounding the project. Looks like everyone will see their neighborhood in shambles though, as much of New York seems to be covered -- it even begins on a future date in Coney Island, and the main characters make it all the way up to incident site U.S. 447 (the area formerly known as Central Park...creepy!).

Catch the trailer before all screenings of Beowulf except the IMAX. (The preview for Omega Man-do-over I Am Legend is currently screening in IMAX.) Below is a photo from the film (we're guessing the subway had delays) and a drawing of what the Cloverfield monster may look like (hey, that hipster is as tall as Lady Liberty!). 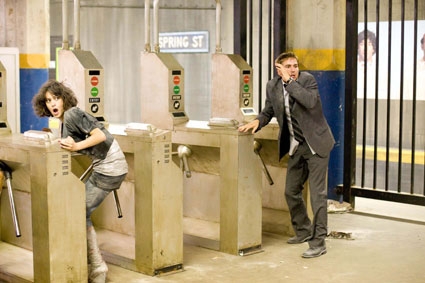