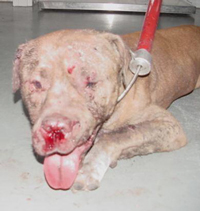 The Giants are heading south to play Atlanta this evening and the Falcons won't have their star quarterback, after Michael Vick was caught running a dogfighting ring out of his Virginia home. It turns out that New York City might be the nation's dogfighting capital though. The New York Post reported yesterday that Bronx resident Ralph Reyes runs an unlicensed kennel out of the basement of a residential walk-up building on Valentine Ave. That's where he allegedly breeds and supplies American Pit Bull Terriers for fights to the death.

According to the Humane Society of the United States, Reyes doesn't just breed the dogs, but he operates a dogfighting ring that the HSUS considers one of the 20 largest in the nation.

Fighters come from as far as Puerto Rico, Florida and Texas to match their dogs with purses ranging from $300 to $300,000 for prized fighters and crowds swelling to 500, sources have told The Post.

John Goodwin, the manager of the HSUS Animal Fighting Task Force, says that NYC is big in the dog fighting world because there is virtually no enforcement against the practice. The HSUS itself gave up its New York investigation into Reyes because it said the organization could get no cooperation from the NYPD. Reyes, for his part, denies that he has anything to do with dogfighting.

Separately, New Yorker Alex Aliksanyan spent a half million dollars to establish The Buddy Fund, which runs a web site called DogsInDanger.com out of a Broadway office. The site works with government shelters around the country and lists dogs that are in imminent danger of being put to sleep due to shelter overcrowding. The hope is to match dogs with just a few days to live with families willing to adopt them.