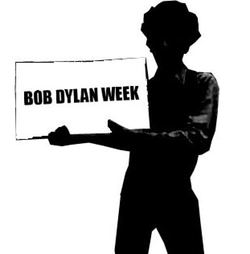 We're celebrating Bob Dylan's 71st birthday with a series of posts about the legendary songwriter this week. As mercurial as Dylan has always been, there is one thing we do know: for as long as Dylan has been writing songs, he has been writing to, for and about New York City. Yesterday we delved into our favorite Dylan covers, and today we're revisiting his Freewheelin' album cover.

A few years ago we had an ongoing series called NYC Album Art, where we tried to uncover more about some well-known album covers shot in New York City, this of course included The Freewheelin' Bob Dylan. The cover features a photograph of a 21-year-old Dylan and his girlfriend at the time, Suze Rotolo (who died last February). History will tell you Rotolo inspired the songs "Don't Think Twice, It's Alright" and "Boots of Spanish Leather." It will also tell you that Dylan wanted to (add a woman and) recreate this shot of James Dean.

The photograph was taken in February 1963 by Don Hunstein on Jones Street and West 4th Street (here's what it looks like today), nearby Dylan and Rotolo's $60/month (that's a little over $400 today) at 161 West 4th. 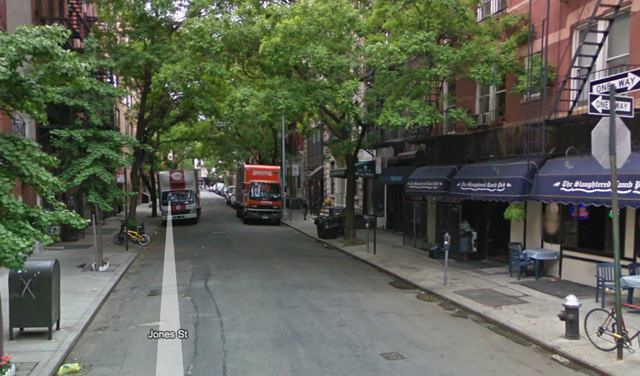 Hunstein said, "It was the first time I'd shot him. I asked him to walk away about 50 feet from me, turn around and walk to me. Because it was cold we didn’t take terribly much time, but we were lucky to get what got we got."

Two years after we originally revisted this album cover, Rotolo told the NY Times that Dylan "wore a very thin jacket, because image was all. Our apartment was always cold, so I had a sweater on, plus I borrowed one of his big, bulky sweaters. On top of that I put on a coat. So I felt like an Italian sausage." And in her memoir she wrote, "It is one of those cultural markers that influenced the look of album covers precisely because of its casual down-home spontaneity and sensibility. Most album covers were carefully staged and controlled, to terrific effect on the Blue Note jazz album covers... and to not-so great-effect on the perfectly posed and clean-cut pop and folk albums. Whoever was responsible for choosing that particular photograph really had an eye for a new look."

It also inspired Dylan's fans—NY Times critic Janet Maslin once wrote that the photograph "inspired countless young men to hunch their shoulders, look distant, and let the girl do the clinging." Here's an alternate take from the Morrison Hotel Gallery in NYC: 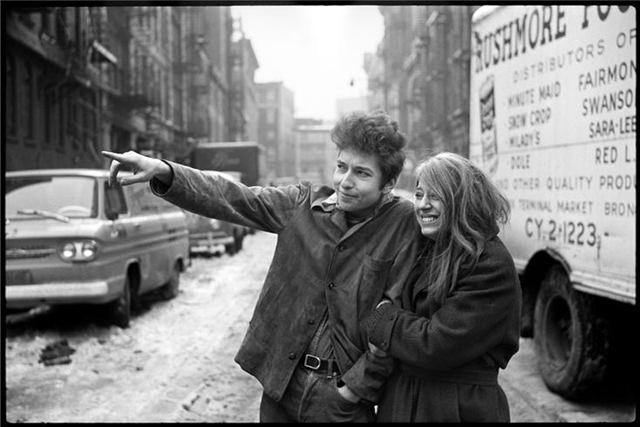 The first song on the album became one of Dylan's most celebrated, "Blowin' in the Wind":