NY Times on Blue: Unlike Other "Awful" Buildings Rising Downtown 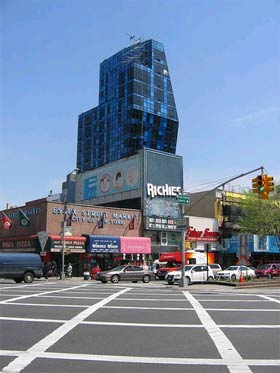 The NY Times weighs in on Bernard Tschumi’s Blue building at 105 Norfolk St. Fresh off reviews from New Orleans, Paris and Brazil, architecture critic Nicolai Ouroussoff is back home with a piece on the 17-story blue-paneled, crystalline tower.

Ouroussoff, as regular readers know, is put off by most of the high-design, luxury residential towers now rising across Manhattan. But, walking along the streets of the Lower East Side, alongside brick tenements, public housing complexes and Delancey Street’s "rusting infrastructure," the Big O. finds that despite his “teetering on the edge of becoming a real estate promoter,” he actually, gulp, likes the thing. He even says that it evokes Mondrian’s “Broadway Boogie Woogie.”

Are we witnessing a softer, more cuddly, post-vacation Ouroussoff? Or is there something so lovably oddball about the building that O. just has to embrace it? Well, surprise, it’s the latter! The building, he says, lacks self-importance and has a “hypnotic appeal” that is grounded in the “gritty disorder of its surroundings.” Ouroussoff adds that unlike others who have designed buildings in the area – cough, The Hotel on Rivington’s Grzywinksi Pons, cough – Tschumi has an “older vision of the neighborhood,” based on the building’s twists and turns. Ouroussoff gives Tschumi a nod for building on a tight site with zoning restrictions and developer pressures. He even likes the apartments, which get “increasingly idiosyncratic” the higher you go.

And here's how he ends:

[T]he Blue Building is not a major work of art. But it nonetheless captures an aspect of the city that is slowly fading from view: its role as a sanctuary for misfits and outcasts, a place full of dark corners and unexpected encounters. If only such people could afford the price tag.

We wish one day that we could figure out why he loves oddballs so much. And why he is reviewing Blue now when the building was the talk of the town for most of, um, 2006. Just asking.